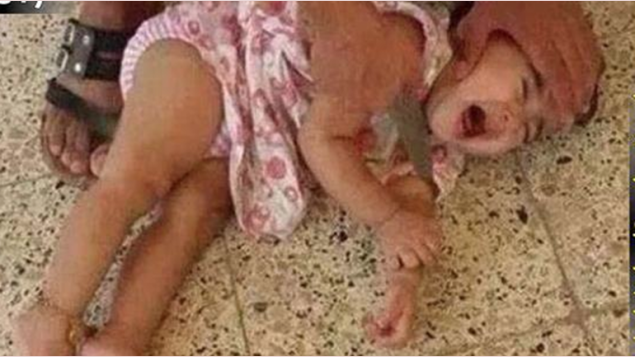 ‘Rigged and then detonated as part of a training exercise.’

ISIS has become known for its depraved attacks on Christians and other people of other faiths in the Middle East that include sexual assault, crucifixion, beheading and even the killing of children by sword or gun.

But a new report reveals that the Muslim organization marching across Iraq and Syria, claiming territory and portraying itself as a caliphate of Islam, has descended even further.

To the level of booby-trapping and exploding an infant.

Shoebat on Monday cited Arabic language news sources in the Middle East reporting that in Iraq, Diyala Province Security Committee Chairman Sadiq el-Husseini said, according to Al-Sumeriah News, that ISIS “booby trapped the baby north of Shirqat in the Saladin Province and then in front of tens of armed ISIS men detonated it from afar.”

The report, according to Shoebat, added that the baby’s father was executed just weeks ago for participating in the killing of an ISIS member.

Shoebat said the baby was then rigged and then detonated as part of a training exercise by ISIS to teach its [fellow terrorists] booby-trapping techniques.

The Iraqi Ministry for Human Rights said ISIS also kidnapped four girls from the same family because they refused to participate in “sex jihad,” and they disappeared.

ISIS also has developed a new execution for men: amputating their sex organ. The ISIS  [terrorists] then “let their blood drain until they died while [their] hands were tied,” the report said.

Shoebat said the accuracy of the reports seem plausible, because in one recorded video issued by ISIS a number of execution methods are documented, including “booby-trapping heads with explosives and then detonating the charges to have the heads fly like projectiles.”

The ISIS video shows several men being put into a car and then a rocket-propelled grenade hits the vehicle and explodes.

Another scenario has victims locked in a large metal cage that is lowered under water, drowning them.

Then there is a row of victims who are bound together by what appears to be a detonating cord wrapped around their necks. The subsequent explosion decapitates most of them.

The video can be see here (WARNING: EXTREMELY GRAPHIC):
http://www.wnd.com/2015/07/horror-isis-booby-traps-baby-to-explode/