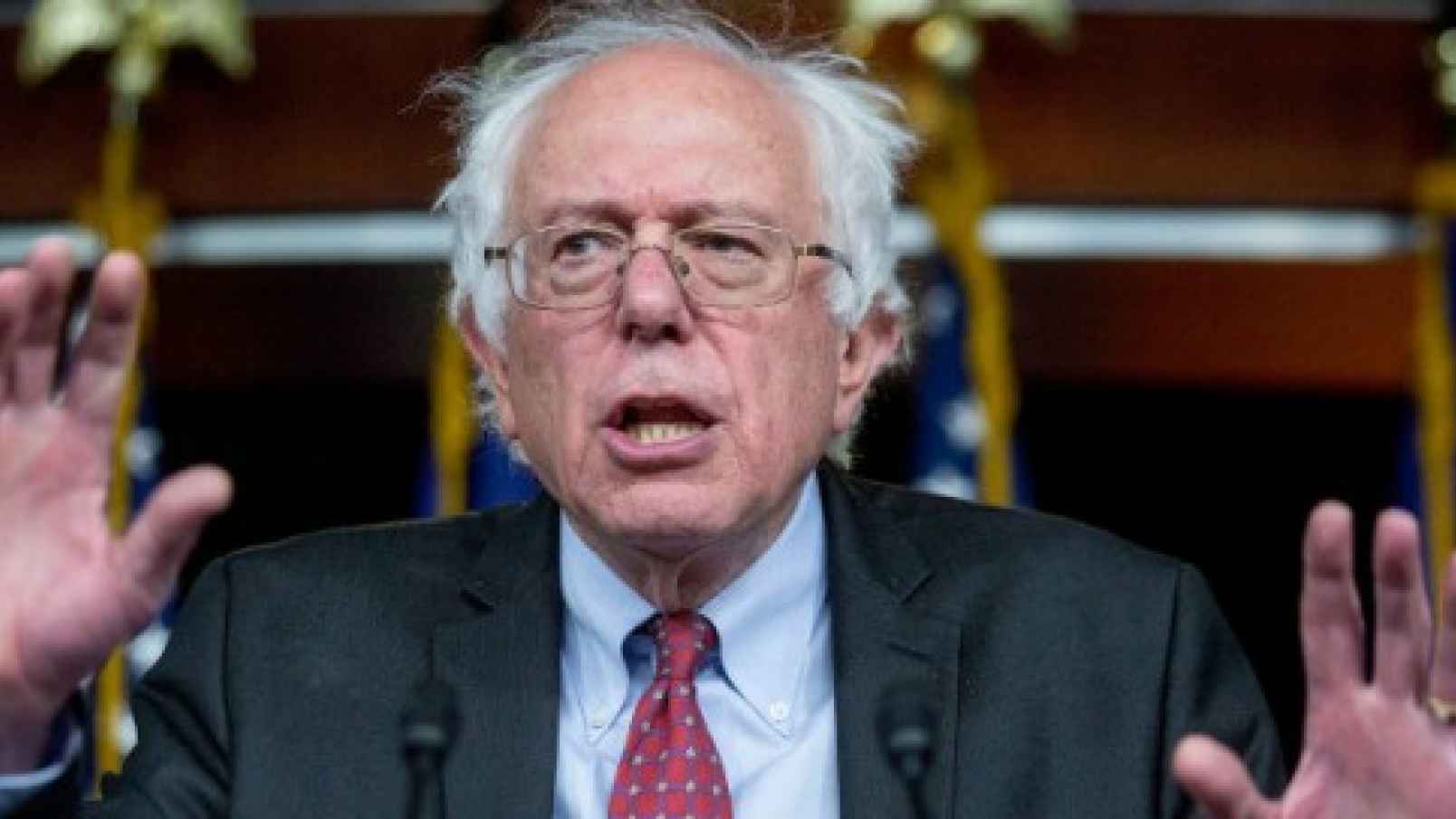 At a Bernie Sanders event in New York City, a black “community activist” began ranting about “Zionist Jews” running the Federal Reserve and Wall Street. At previous events, Sanders had been quick to condemn what he claimed was bigoted and Islamophobic rhetoric by Republicans. But when confronted with the real thing by a left-wing activist at one of his own events, he couldn’t do it.

There was no condemnation of anti-Semitism. Instead after an initial claim that he was proud to be Jewish, he switched to a rambling speech criticizing Israel and distancing himself from Zionism.

Bernie Sanders had suggested at the same event that President Clinton was racist for defending his crime fighting policies to Black Lives Matter protesters, but would not condemn anti-Semitism. Instead of defying left-wing hatred for Jews, he tried to suggest that he wasn’t one of the “bad Zionists”. He was one of the “good Jews” who had a balanced position on Israel and “Palestine”.

It was a sad and shameful display. And this was not the first time that Bernie saw bigotry and blinked.

When NPR’s Diane Rehm accused him of having dual citizenship in Israel, he stumbled through a reply, but never condemned the anti-Semitism inherent in the question. He backed Jesse Jackson despite the Hymietown slur. When asked about it, he did his best to avoid directly condemning anti-Semitism.

Bernie Sanders came out of a political movement rife with anti-Semitism. He encounters it in public on a regular basis. And he is too much of a coward to stand up to it.

After Roseanne Barr ran for president, she stated that during the campaign, “everything I had ever believed about the left was severely shaken” and that she discovered that “many of those I had considered comrades were naked bigots”.

And she did what Bernie Sanders won’t do. She condemned the bigotry.

There’s little doubt that Bernie Sanders has encountered far more anti-Semitism in private than he has in public. And at every turn of the road, he made the decision to fall in line and keep his mouth shut.

In the UK, prominent Jews and non-Jews within Labour have been speaking out against growing anti-Semitism within the party and its political adjuncts. But here there’s a culture of silence about anti-Semitism on the left. And those who speak out pay the price. Consider the response to Phyllis Chesler’s The New Anti-Semitism. And, in contrast, the mainstreaming of Max Blumenthal’s blatant bigotry.

The “gentleman’s agreement” used to be that Jews were expected to keep quiet about anti-Semitism on the left while claiming that all the bigots were on the right. Bernie Sanders is a product of that system. His refusal to talk about anti-Semitism while accusing the right of bigotry is typical of how it works.

The Sanders event at the Apollo Theater also featured Harry Belafonte, who had claimed that “Hitler had a lot of Jews high up in the hierarchy of the Third Reich” and Spike Lee who had responded to criticism of anti-Semitic stereotypes in his movies by saying that he “couldn’t make an anti-Semitic film” because Jews run Hollywood.  What does it say about Bernie Sanders that these are the ugly views of the people whom his campaign used in order to present him to a black audience?

Bernie Sanders has made his peace with anti-Semitism. He would rather that you didn’t scream it at him in public, but if you do, he will talk about how there are bad people on both sides in Israel.

But this is a “gentleman’s agreement” that isn’t holding up as the anti-Semitism on the left grows more blatant humiliating good “comrades” like Bernie Sanders at public events. During the Iraq War even a veteran anti-Israel activist like Michael Lerner was left with no choice but to write a Wall Street Journal editorial complaining that anti-Semitism had become the “acceptable –ism”.

Bernie Sanders troops from rally to rally dutifully invoking Hitler and the Holocaust, but he never discusses the fact that the anti-Semitism of National Socialism was rooted in Socialism. Even the inventor of the term, Wilhelm Marr, was a German Socialist who wrote, “Anti-Semitism is a socialist movement, only in nobler and purer form than social democracy.” Georg Ritter von Schonerer, whose “Fuhrer” style heavily influenced Hitler, had been dedicated to fighting “Jewish free-market capitalism”.

The genesis of the movement that led to the mass murder of Jews could be found in a populist Socialism not too different from his own. The origin of Occupy Wall Street, a movement that helped pave the way for his political campaign, was in Adbusters, a magazine which featured articles such as, “Why Won’t Anyone Say They Are Jewish?” The author of that article, Kalle Lasn, praises Bernie Sanders for saying the same things that Adbusters had been saying.

Why won’t Bernie Sanders say that they’re anti-Semitic? It’s obvious why. He needs their support.

The fact that a presidential candidate of Jewish ethnic origin can’t condemn anti-Semitism even when it’s being shouted right in his face shows how serious the problem is. Bernie Sanders will condemn all sorts of bigotry. But he won’t address left-wing anti-Semitism. It would end his political career.

Bernie Sanders is a coward. But he’s not the only one.

The old “gentleman’s agreement” is coming apart as anti-Semitic tropes are increasingly mainstreamed. Hard left activists like Spencer Ackerman or M.J. Rosenberg, who are by no stretch of the imagination friendly to Israel, occasionally scribble a brief complaint about the extremity of the ugliness growing in their movement and then the anti-Semitism business on the left goes on as usual.

A significant portion of the hard left is not anti-capitalist in the abstract, as Bernie Sanders is, but convinced that secretive networks of Jews control the economy. Corporate conspiracies are an easy gateway drug to Jewish conspiracies. Tie in an anti-Israel crowd which blames everything from American police to the Iraq War on Zionism and the anti-Semitic conspiracy theories write themselves.

While these people are a minority, as Adbusters reminds us, they are very influential on the left. They are the types of activists who show up early and leave late, who help shape committees, appear at events and donate without having to be asked. They play a major role in the left-wing networks that boosted Obama’s career and that took Bernie Sanders from an obscure joke to a viable candidate.

Instead of denouncing them, Bernie Sanders panders to them by attacking the Jewish State.

That is why there has been no sustained effort from within the American left to push back against anti-Semitism within the movement. It’s easier instead to ignore it or to pander to it. To respond to anti-Semitism by criticizing Israel, as Bernie Sanders did. Or to just pretend not to hear what is being said.

The Sanders campaign is modeled on Jeremy Corbyn’s successful campaign for the Labour party leadership in the UK. But Corbyn’s victory brought his assorted bigoted allies out of the woodwork like Raed Salah of the Islamic Movement who claimed that Jews use human blood for matzah, Holocaust denier Paul Eisen and Stephen Sizer who claimed that the Jews were behind 9/11. Now anti-Semitism in the Labour party is being vigorously debated. Unfortunately Bernie Sanders’ Jewish origins allow him to “Jewwash” the anti-Semitism of the American left in ways that Corbyn could not. By standing up there and ignoring anti-Semitism, even when it’s directed at him, Bernie Sanders pretends it’s not a problem.

That is what makes his cowardice in the face of left-wing anti-Semitism so useful to the anti-Semitic left.