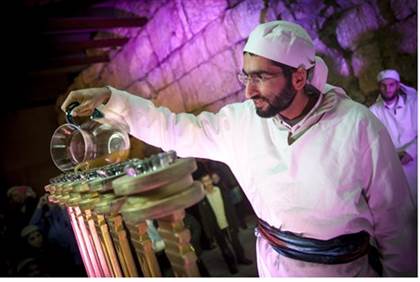 On Monday, the seventh day of Hanukkah, a truly unique and historic event took place for the first time in nearly 2,000 years.

In the Old City of Jerusalem, hundreds gathered to witness the lighting of a hanukkiah, or menorah, using pure olive oil made to the precise specifications as the oil used to light the menorah in the ancient Jewish Temples.

The event was jointly organized by the Temple Institute and the Association of Temple Movements.

In accordance with Jewish law (Halakha), fully organic olives had to be sourced from Israel’s northern Golan Heights, and were picked by volunteers. The oil was then extracted in a state of ritual purity, under the supervision of the Temple Institute’s Rabbi Azaryah Ariel.

“Jewish people universally acknowledge the twin themes of the beloved holiday of Chanukah: Light and Freedom. The historic and inspiring event hosted on the seventh night of Hanukkah by the Temple Institute was actually a celebration of both,” said Temple Institute International Director Rabbi Chaim Richman.

“The light of the Temple Menorah, the kindling of which was ‘practiced’ at this event, represents the light of the Shechina, the Divine Presence that shines forth from the Holy Temple, illuminating the entire world.

“After years of research and preparation, for the first time since the destruction of the Holy Temple, pure olive oil was produced for the Temple Menorah, as an initial step in restoring the concept of Biblical purity to the people of Israel,” Rabbi Richman said.

Rabbi Richman has been one of the leading campaigners for Jewish prayer rights on the Temple Mount, Judaism’s holiest site. Jews are currently forbidden from praying there due to pressure by Muslim organizations and Islamist extremists.

“In these very days in which we are struggling for the rights of Jews to pray on the Temple Mount, we recall and commemorate our ancestors’ struggle for religious freedom in this land under the cruel occupation of the Greek invaders,” he continued. “When Israel truly exercises full sovereignty over the Temple Mount with the building of the Holy Temple, Israel and all of humanity will finally experience true freedom.”

The lighting ceremony was carried out by Kohanim – members of the Jewish priestly tribe who served in the Temple – who donned the priestly garbs recreated by the Temple Institute for use in the Third Jewish Temple.

The Temple Institute’s objective is not only to educate about the importance of the two Temples of Jerusalem – the latter of which was destroyed in 70 CE – but also to prepare for the eventualy rebuilding of the Temple, according to Jewish tradition.