In Speech to Jews on Iran, Anti-Israel Obama Invents a ‘Pro-Israel’ Past and Wears Yarmulke 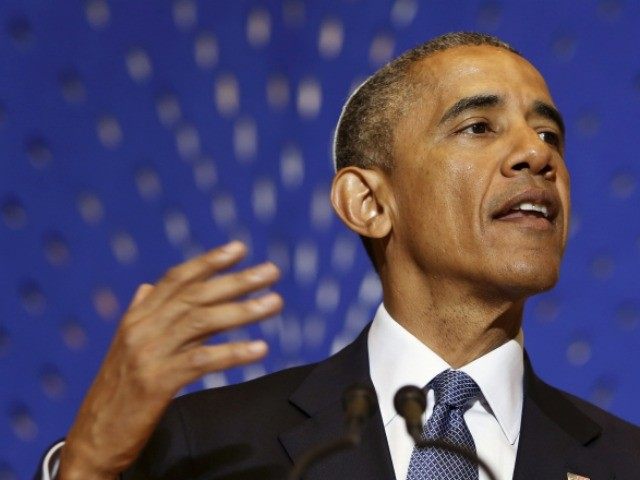 What’s really sad is all the self-hating leftist Jews that believe it.

President Barack Obama spoke to Congregation Adas Israel in Washington, D.C. on Friday, ahead of the Jewish Sabbath and the Jewish holiday of Shavuot (Pentecost), which begins Saturday night and is observed for two days. Much of the speech was familiar from the president’s past remarks about the Jewish community and relations with Israel. There was, however, one innovation: Obama invented a story about his past fascination with, and support for, the State of Israel.

In the context of explaining why he airs public disagreements with Israel and its government, Obama told congregants:

But there are also going to be some disagreements rooted in shared history that go beyond tactics, that are rooted in how we might remain true to our shared values.  I came to know Israel as a young man through these incredible images of kibbutzim, and Moshe Dayan, and Golda Meir, and Israel overcoming incredible odds in the ’67 war.  The notion of pioneers who set out not only to safeguard a nation, but to remake the world.  Not only to make the desert bloom, but to allow their values to flourish; to ensure that the best of Judaism would thrive.  And those values in many ways came to be my own values.  They believed the story of their people gave them a unique perspective among the nations of the world, a unique moral authority and responsibility that comes from having once been a stranger yourself.

And to a young man like me, grappling with his own identity, recognizing the scars of race here in this nation, inspired by the civil rights struggle, the idea that you could be grounded in your history, as Israel was, but not be trapped by it, to be able to repair the world — that idea was liberating.  The example of Israel and its values was inspiring.

Obama’s many biographies–both his own memoirs, and the voluminous writings of others–mention no such early interest in Israel. In fact, those who knew Obama in his early years in Chicago describe a man who understood little about Israel. He had extensive contact with left-wing Jewish activists, and his home is across the street from a synagogue. But to the extent that he took an interest in the Middle East, it was in the Palestinian cause, and the larger Arab and Muslim world.

As Peter Wallsten wrote in April 2008, in the infamous Los Angeles Times article that revealed the existence of the still-secret “Khalidi tape,” Obama’s former Chicago allies and associates described a man whose personal sympathies lay more with the Palestinians, and who promised to pursue a more “evenhanded” policy. One of those who met him in those days, the radical anti-Israel activist Ali Abunimah, complained that a pro-Palestinian Obama had since “learned to love Israel.”

In Obama’s first memoir, Dreams from my Father, there is no recollection whatsoever of any kind of fascination with Israel–not even the left-wing, socialist icons Obama name-checked in his Adas Jeshurun speech. The word “Israel” only appears once, in the words of “Rafiq,” a somewhat adversarial character who admonishes the young community organizer that liberal American Jews really care more “’bout they relatives in Israel” than black children on the South Side of Chicago.

We may conclude that Obama’s supposed fascination with Israel is a fabrication–like the “composite” characters in his autobiographies, or the inaccurate stories he told about his mother’s death during the Obamacare debate, or the many other fibs he has told in the past for political purposes. The kibbutznik Obama is a bit of kitsch tailored to pander to the audience at Adas Jeshurun–many of whom, like journalist Jeffrey Goldberg, are die-hard members of the Obama fan club.

Obama has gone further than any president in symbolic gestures of support for Israel–as well as “childish” gestures of disdain. He supports Iron Dome–but wants a terrible deal with Iran.

At the core, his ideas about Israel are secondary to his obsession with “fairness,” which often means helping Israel’s enemies, even while mollifying Israel’s liberal supporters.