Invention of a “Palestinian” People to Co-Opt Jewish History 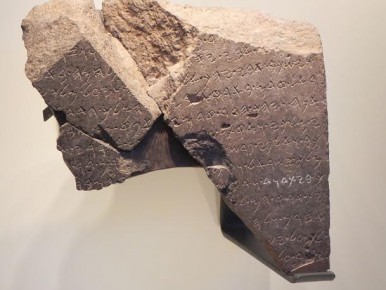 In December 2011, former House Speaker and presidential candidate, Newt Gingrich made the following observation regarding the Arabs in Israel;

Remember there was no Palestine as a state. It was part of the Ottoman Empire. And I think that we’ve had an invented Palestinian people, who are in fact Arabs, and were historically part of the Arab community…

That comment set off a firestorm of debate and criticism but is in actuality, grounded in historical fact. As noted historian Benny Morris pointed out in his acclaimed book, 1948: The First Arab-Israeli War, at the turn of the 20th century, most Arabs residing in the Land of Israel or “Palestine” considered themselves to be subjects of the Ottoman Empire. There were some Palestinian Arabs with vague nationalistic tendencies but even this minority considered itself to be part of Greater Syria. There simply was no reference to an independent Palestine for a distinct group of people calling themselves “Palestinians.”

Morris also perceptively notes that the residents of Palestinian villages routinely failed to come to the assistance of nearby villages that were under attack by Jewish forces thus reinforcing the view that Arab villagers felt little loyalty to all but clan and village. The notion of a “Palestinian people” was an alien concept to the common Palestinian villager who was not bound by any sense of duty to assist a neighboring village.

Occasionally, Arabs in Israel themselves will acknowledge this fact. In a revealing 1977 interview with the Dutch newspaper Trouw, PLO executive committee member Zahir Muhsein stated,

For tactical reasons, Jordan, which is a sovereign state with defined borders, cannot raise claims to Haifa and Jaffa. While as a Palestinian, I can undoubtedly demand Haifa, Jaffa, Beer-Sheva and Jerusalem. However, the moment we reclaim our right to all of Palestine, we will not wait even a minute to unite Palestine and Jordan.

It was a rare but astonishing moment of candor. A senior PLO member was openly acknowledging what few would readily admit. But his was not an isolated admission. In a March 2012 televised address, Hamas Minister of the Interior and of National Security Fathi Hammad essentially validated Gingrich’s assessment of the [so-called] Palestinians. While pleading for Egyptian fuel, Hammad let loose with a series of embarrassing admissions that were certainly not intended for Western audiences.

“Every Palestinian…throughout Palestine can prove his Arab roots, whether from Saudi Arabia or Yemen or anywhere.” He went on to say that “personally, half my family is Egyptian, we are all like that.” And further buries himself deeper by stating, “Brothers, half the Palestinians are Egyptian and the other half are Saudis…Who are the Palestinians?” he asks rhetorically. “We have families called al-Masri whose roots are Egyptian, Egyptian! We are Egyptian! We are Arab! We are Muslim!” He concludes his rant with the obligatory Muslim battle cry, “Allahuakbar!” Curiously absent from his long diatribe is any recognition of an independent Palestinian identity and that’s precisely because there simply isn’t any.

Lacking their own independent history, culture and identity, Palestinians have adopted a strategy of denying Jewish history. Arafat, for example, flat out denied the fact that great Jewish Temples, built first by king Solomon and then by Herod, once stood where the Al-Aqsa Mosque currently stands. So ridiculous were his comments that they earned a swift rebuke from President Clinton. Arafat’s successor, Mahmoud Abbas taking cue from his boss also adopted this odious position. It should therefore come as no surprise that Abbas is also a confirmed Holocaust denier, despite his transparent efforts to rehabilitate his image for his gullible Western audience.

Palestinian Arabs have also attempted to recruit Western “experts” and academics to their cause. In his insightful book The Fight for Jerusalem: Radical Islam, the West, and the Future of the Holy City, veteran Israeli diplomat Dore Gold chronicles the length to which Arab-Muslims and their Western lackeys will go to deny the Jewish nexus to the Land of Israel. They argued that much of ancient Jewish history was nothing but mythology including the Kingdoms of David and Solomon.

From the Arab perspective, the tactic was a sound one. Sever the ancient historical Jewish nexus with Israel and you severely undermine claims of indigenousness. But archeology does not lie and those very Western academics (at least the intellectually honest ones) were forced to retract their findings and conclusions after the dramatic 1993 discovery of a 9th century stele at Tel Dan in northern Israel that clearly referenced the “House of David.” Additional discoveries since then, including finds in Jerusalem, Tel Zayit and at the Fortress of Elah have further eroded claims by skeptics and naysayers.

Not content with denying Jewish history, Palestinian Arabs have actually attempted to co-opt it by absurdly claiming that Moses as well as King Saul were Palestinian Muslims who conquered and claimed “Palestine” for the benefit of Palestinians. These risible comments were spewed forth by “Dr.” Omar Ja’ara, a lecturer at Al-Najah University in Nablus and broadcast on Palestinian Authority TV. He notes further that the actions of Moses and Saul represented “the first Palestinian liberation through armed struggle to liberate Palestine… this is our logic and this is our culture.”

Incidentally, Al-Najah University boasts on its website that it is “the first Palestinian University to obtain the EFQM European Certificate of Excellence.” Something to bear in mind next time any parent contemplates sending their child off to Europe for higher education.

Of course it doesn’t matter that Saul lived approximately 1,700 years before Muhammad was zygote. Facts play absolutely no role in Palestinian academia. Empirical data and evidence is ignored. Precedence is given to upholding a false, pernicious and viscerally anti-Semitic narrative that either denies historical fact or co-opts it.

As PLO bigwig Zahir Muhsein candidly noted, the claim of a Palestinian identity is a myth whose aim is not designed to achieve liberation or advancement for any particular people but rather to subjugate and destroy another people. For those of you, who still remain unconvinced; consider the recent comments made by a prominent sheikh during a religious sermon at the Al-Aqsa Mosque. During his tirade, which included the usual dose of anti-Semitic vitriol, the sheikh never once uttered a desire or longing for Palestinian statehood. Instead he expresses the desire to join with ISIS in its quest for an Islamic caliphate and asks the large crowd of acolytes surrounding him to, “pledge allegiance to the Muslim Caliph,” and they in turn respond with chants of “amen!”

Few in the West have faced up to this malevolent reality. They continue to adhere to the harmful, dogmatic formula of a two-state solution. What they willfully fail to realize is that such a solution poses an existential threat to the Mideast’s only democracy and will most certainly have grave negative consequences for the region at large.