Iran warns: Any US aggression against Iran will results in destruction of Israel 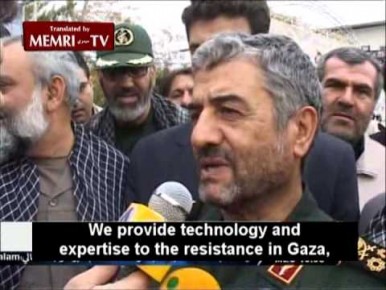 TEHRAN (FNA)- Commander of the Islamic Revolution Guards Corps (IRGC) Major General Mohammad Ali Jafari warned that any US aggression against Iran will result in the liberation of the “occupied” territories of “Palestine” by Iranian troops.

“Americans have very clearly surrendered to Iran’s might and this is obvious in their behavior in the region and in the negotiations, and the enemies’ reservations vis-a-vis Iran are completely felt,” Jafari said, addressing a forum in Tehran on Monday.

He said today the entire region is within the range of resistance groups’ missiles, which, he said, is interpreted as the failure and collapse of the Zionist regime. “And the final victory will certainly occur,” he added.

The IRGC commander, meantime, cautioned that if the US and its allies dare to launch a military attack on Iran, then “our war will end by conquering Palestine [Israel]”.

In relevant remarks in October, Jafari underlined Iran’s clout as a regional power, and said Tehran stood firm as a stumbling block in the way of the Israeli regime’s expansion.

“Now the Islamic Iran doesn’t allow the Zionist regime’s expansion in the region and it is considered as the opposite point of the Zionist regime,” Jafari said, addressing people in the Central province of Isfahan.

Noting that the enemies had failed in their numerous plots to deviate the Islamic Revolution from its righteous path, he said now the Revolution has turned into the world’s spiritual superpower.

“Exporting the Islamic Revolution to the world, the country’s full and sustainable security and its pride and honor are the achievements gained as a result of the blood of our martyrs,” Jafari said.

Iran is now known as to be spearheading the resistance front against Israel. Iran is known to be the main supporter of Palestinian resistance groups and the Hezbollah Movement in Lebanon.

Iran’s Supreme Leader Ayatollah Seyed Ali Khamenei said last year that the country had played a key and outstanding role in helping Hezbollah and Palestinian [terrorist] groups in their wars with Israel.