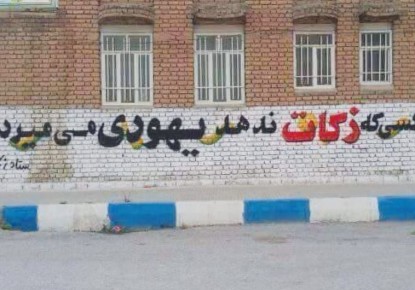 This graffiti on a wall in Iran reads: ‘He who does not give charity dies as a Jew’.

Israel’s overseas intelligence agency, the Mossad, has discovered that Iran murdered three Iranian Jews who disappeared in 1997 as they attempted to flee to Israel via Pakistan.

The three, Nourollah Rabizadeh and brothers Cyrus and Avraham Ghahremani, fled Tehran in February 1997. They were supposed to meet up with a smuggler on the Pakistani border, but disappeared along the way, according to a report in Ynet on Monday.

Newly discovered information led the intelligence agency to conclude that they were captured while escaping and murdered. Their families, which had escaped to Israel via Turkey, were recently informed of the agency’s conclusion.

On the basis of the information, a rabbinical court in Jerusalem has ruled that the wives of the missing husbands are now widows and able to remarry. The families requested meetings with President Reuven Rivlin and Prime Minister Benjamin Netanyahu.

An Iranian Jew who lives outside of Iran, and who did not want to be identified, told The Jerusalem Post in a phone interview that around 15,000 – 18,000 Jews remain in Iran.

… Harold Rhode, a senior fellow at the New-York-based Gatestone Institute and a former Islamic affairs adviser in the office of the American secretary of defense, told the Post that Iranian government statistics on the numbers of Jews in the country cannot be trusted, as they are trying to paint a nice picture of the situation.

Some Iranian Jews went to Israel, others to America, and those who stayed in Iran “feel very Iranian,” Rhode said, who speaks Farsi and has spent time in the country.

“I do not remember ever reading anything in Iranian literature where a Jew is portrayed positively,” he stated, adding, “Historically, Jews in Iran were not portrayed in a positive way” Rhode shared a picture from Iran of graffiti written on a building, dated March 12, 2015, which states: “He who does not give charity dies as a Jew.”

“This summarizes what Iranians generally think of Jews,” Rhode asserted.

In 1994, eight other Jews who fled Iran for Israel in three groups went missing. A few years ago, Prime Minister Benjamin Netanyahu called on the Mossad to intensify the investigation concerning the missing, according to Ynet.

Last year, the Prime Minister’s Office announced that the Mossad had solved the mystery of what happened to those who tried to flee Iran in 1994. The eight were captured and murdered, it discovered.