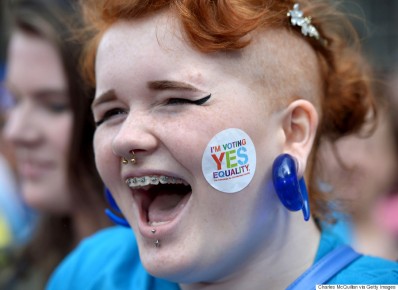 Irish voters have resoundingly backed amending the constitution to legalize gay marriage, leaders on both sides of the Irish referendum declared Saturday after the world’s first national vote on the issue.

As the official ballot counting continued, the only question appeared to be how large the “yes” margin of victory from Friday’s vote would be. Analysts said the “yes” support was likely to exceed 60 percent nationally when official results are announced later Saturday.

Gay couples hugged and kissed each other amid scenes of jubilation at counting centers and at the official results center in Dublin Castle, whose cobblestoned central square was opened so thousands of revelers could sit in the sunshine and watch the results live on big-screen televisions.

“We’re the first country in the world to enshrine marriage equality in our constitution and do so by popular mandate. That makes us a beacon, a light to the rest of the world, of liberty and equality. So it’s a very proud day to be Irish,” said Leo Varadkar, a Cabinet minister who came out as gay at the start of a government-led effort to amend Ireland’s conservative Catholic constitution.

“People from the LGBT (lesbian, gay, bisexual and transgender) community in Ireland are a minority. But with our parents, our families, or friends and co-workers and colleagues, we’re a majority,” said Varadkar, who watched the votes being tabulated at the County Dublin ballot center.

“For me it wasn’t just a referendum. It was more like a social revolution,” he said.

In the first official result, the Dublin North West constituency voted 70.4 percent “yes” to gay marriage. But the outcome was already beyond dispute as observers, permitted to watch the paper ballots being counted at all election centers, offered precise tallies giving the “yes” side an unassailable nationwide lead.