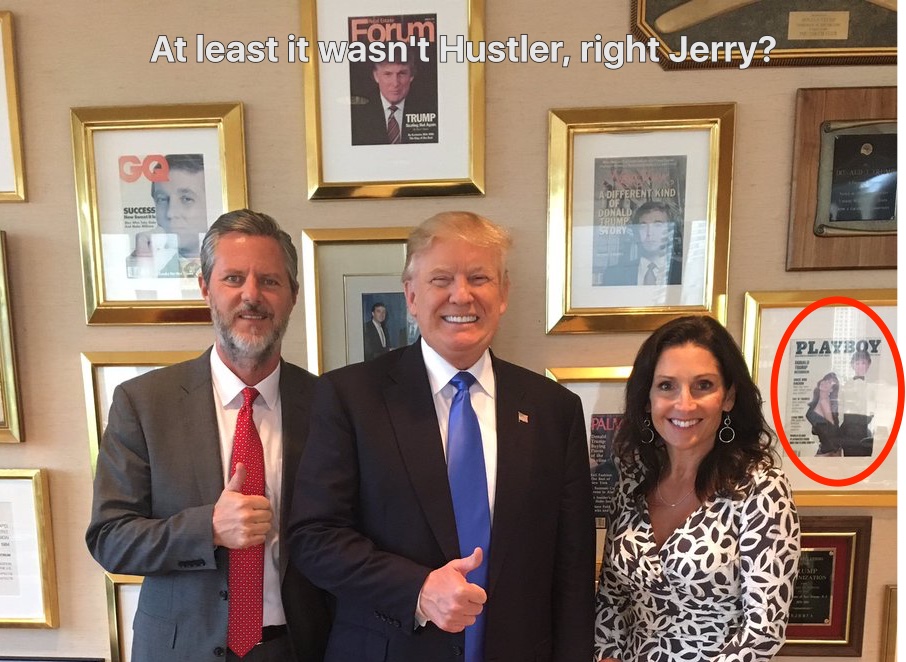 Jerry Falwell, Jr., whose father sued Hustler magazine over the magazine’s portrayal of the preacher, attended the meeting of evangelicals with Trump. After the meeting, Trump was kind enough to pose for a picture with Jerry Falwell, Jr. and his wife. They let Falwell’s wife stand right beside a framed copy of Playboy magazine, which had Trump on the cover with a lady now in jail for selling cocaine.

It was a real classy time. Real classy…

Some of the names present and now sitting on this board are Paula White, Faith and Freedom Coalition leader, Ralph Reed, former Minnesota Congresswoman Michele Bachmann, and Liberty University President Jerry Falwell Jr.

Falwell Jr. has been a vocal advocate for the poorly coiffed charlatan for months now, so his inclusion on the board was no shock.

The sad, cringe-worthy irony is in this proud tweet, that capped off the meeting of Zod and these supposed leaders of the faith.

Yes. Proudly posing with a candidate’s Playboy magazine cover prominently displayed in the background is the perfect way to draw attention to the needs and concerns of the faith community.

Well done, Mr. Falwell. I’m sure your dad isn’t spinning in his grave, at all.