Remember how the IRS will only answer 53% of calls because of budget issues? Rank-and-file IRS workers are again getting a bonus. 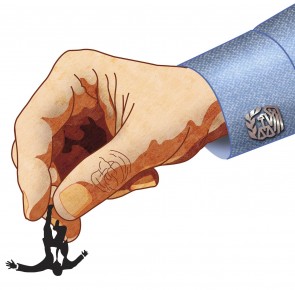 missioner John Koskinen informed IRS employees in an email that they’ll get a bonus next March of 1 percent of their base salary. The performance awards go to most employees.

“I believe that rewarding our high-performing employees is a vital investment for our nation’s tax system,” Koskinen said in the Monday email that was obtained by The Associated Press.

The annual awards are down from two years ago, when agency workers received bonuses of 1.75 percent. They were delayed in the summer of 2013 when automatic budget cuts hit the agency, forcing unpaid furloughs and other cost-cutting moves.

Some Republicans have questioned the payouts in the wake of revelations that the IRS had wrongly targeted tea party organizations and other advocacy groups seeking tax-exempt status.

“The agency — rife with scandal, mismanagement and unaccountability — is awarding bonuses with the very tax dollars they collect from hardworking Americans,” said Sen. Orrin Hatch, R-Utah.

Hatch noted that a Treasury Department investigation earlier this year concluded that bonuses totaling $2.8 million had gone to more than 2,800 employees found to have broken agency rules of conduct — including 1,100 employees who owed back taxes.

Koskinen said that new protections negotiated with the National Treasury Employees Union would deny bonuses to workers who violate the agency’s code of conduct.

“Employees violating these basic standards should not be eligible for financial awards,” Koskinen said.