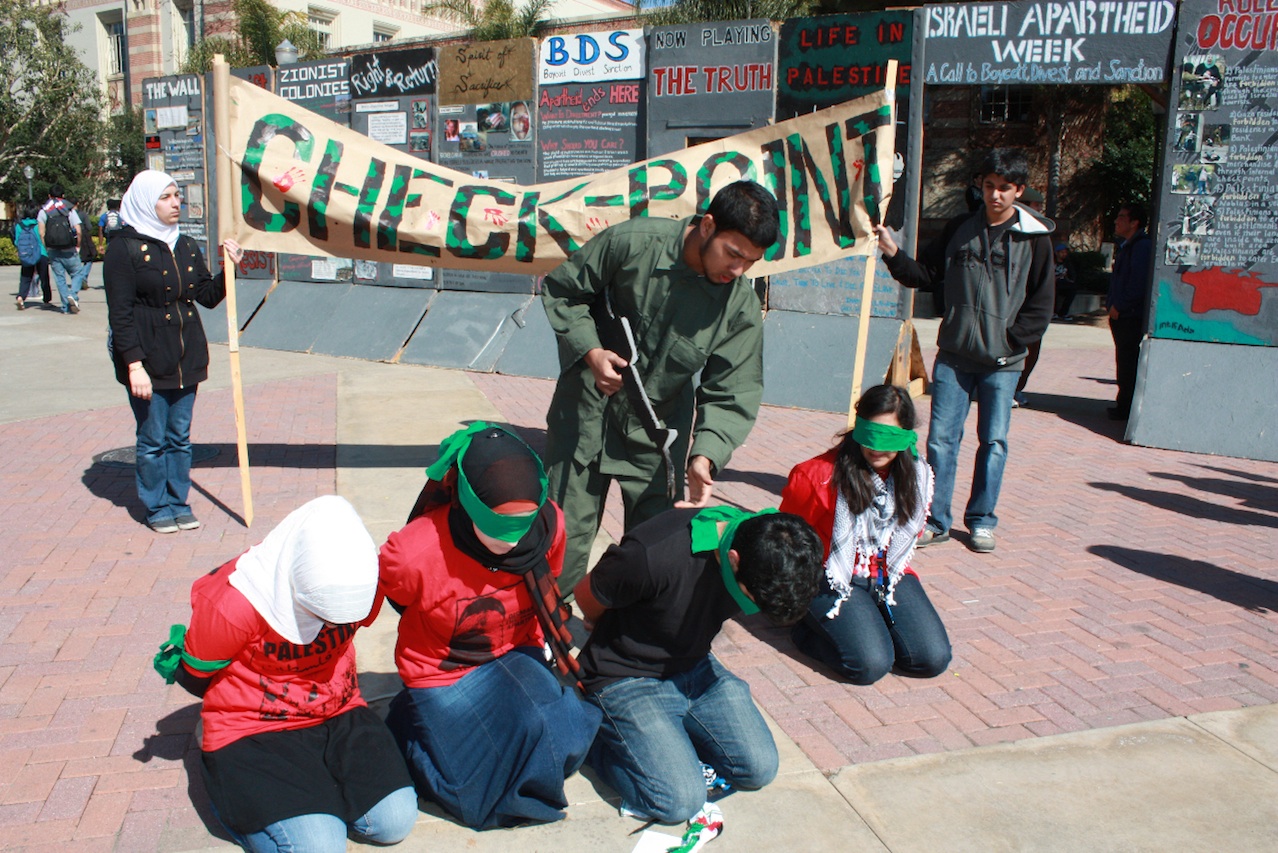 These college students imitate an “Israeli soldier” and blame Israel for what the Arab Muslims are actually guilty of.

The world is witnessing a resurgence of global anti-Semitism not seen since the 1930s and the “Final Solution.” In the Middle East, Hitler-admiring regimes like Iran, and Hitler-admiring parties like Hezbollah, Hamas and the Muslim Brotherhood, are openly planning to finish the job the Nazis started. Even in America, until now the most hospitable place outside of Israel for Jews, the atmosphere is more hostile than at any time in the last 70 years.

According to the FBI, three-fifths of all religious hate crimes in America are now committed against Jews, while a recent Pew poll revealed that 54 percent of Jewish students have either been the subject of an anti-Semitic attack or witnessed one. The frequency of these attacks among college-aged students, moreover, is five times that of any other age group. The reason for this is obvious: Across the United States student groups associated with the Muslim Brotherhood, specifically “Students for Justice in Palestine” (SJP) [there is no such thing as “Palestine”] and the Muslim Students Association, are engaged in a vitriolic campaign against Israel and those students who support its right to exist. These organizations promote the propaganda of the terrorist organization Hamas, and call for the destruction of the Jewish state.

… While SJP’s self-professed purpose is “to promote self-determination for the Palestinian people,” the organization defines the boundaries of this liberation as extending “from the river to the sea,” i.e., from the Jordan River on Israel’s eastern border to its western border on the Mediterranean. To advance this genocidal agenda, SJP endorses the lie that Israel was created on territory stolen from the [so called] “Palestinians” and, therefore, Jews illegally occupy Arab lands from which they must be purged.

In fact, Israel was created on land that had belonged to the Turks, who are not Arabs, for 400 years previously. In 1948 when Israel was created, there was no Palestinian political entity, no movement for a Palestinian state, and no people calling itself Palestinian. These core genocidal lies make up the primary agenda of SJP and its anti-Jewish allies, and are crowned by the ludicrous claim that Israel is an “apartheid state” with policies worthy of the “Nazis.” In fact, Israel is the only democratic and ethnically tolerant state in the Middle East, the only place where gays, Christians and women are safe. The real Nazis in the Middle East are the Arabs who openly call for the extermination of the Jews.

Despite its anti-Semitic, pro-terrorist agendas, SJP is funded by university fees. University administrations officially recognize the organization and grant it the privilege of erecting walls of hate, and conducting “die-ins” and other propaganda stunts in campus centers where other students can’t avoid being assaulted by their noxious accusations.

University administrators who refuse to rein in this hatred operate under pressure from faculty and student activists of the anti-Israel “social justice” left. These include the self-hating Jews of J Street and Jewish Voice for Peace, who join hands with their mortal enemies to condemn anyone who confronts SJP and the malignant forces it represents as “Islamophobes.”

As it happens, “Islamophobe” is a term coined by the Muslim Brotherhood to demonize its opponents, and the center of a campaign seeking a universal ban on critics as religious blasphemers. The campaign’s success can be seen in President Obama’s refusal to call the terrorist Islamic State “Islamic,” or to describe the war waged by the Islamic State, al Qaeda and other Islamic terror organizations as a religious crusade.

Thanks to the savageries of the Islamic State, however, Americans have begun to wake up and to see Jews as canaries in the mine, and to understand that what is happening to Jews is also happening to Christians and others in the way of Islamic Nazis. Nonetheless, the continuing successes of front organizations such as Students for Justice in Palestine are ominous indicators of the dangers that confront us, and should be a wake-up call, too.