Islamic Law: Girls Can Be Married Even ‘In The Cradle’ 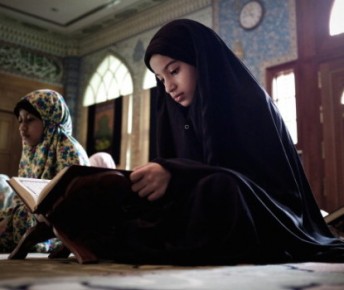 Muslim attempts at “reformation” continue to be limited to words not actions.  A few days ago, efforts to set a minimum age for marriage in Saudi Arabia “received a blow after the Grand Mufti said there was nothing wrong with girls below 15 getting married.”

Two years earlier, the justice ministry began pushing for setting a minimum age in the Arabian kingdom.  According to Gulf News, “It submitted an integrated study on the negative psychological and social effects of underage marriages to religious scholars and requested a fatwa that sets a minimum age.”

However, the ulema—the “religious scholar,” the learned ones of Islamic law—responded by totally ignoring the request.  Saudi Arabia’s highest religious authority, its Grand Mufti, Sheikh Abdul Aziz, shrugged the whole matter off by saying “There is currently no intention to discuss the issue.”  In other words, case closed.

Although the brief Gulf News report focuses on the age 15, going back to earlier reports when the justice ministry began bringing this issue up, one discovers that the issue at stake is full-blown pedophilia.

Back in 2011, for example, Dr. Salih bin Fawzan, a prominent cleric and member of Saudi Arabia’s highest religious council, issued a fatwa asserting that there is no minimum age for marriage and that girls can be married “even if they are in the cradle.”

Appearing in Saudi papers, the fatwa complained that “Uninformed interference with Sharia rulings by the press and journalists is on the increase”—likely a reference to the justice ministry’s advocacy—“posing dire consequences to society, including their interference with the question of marriage to small girls who have not reached maturity, and their demand that a minimum age be set for girls to marry.”

Fawzan insisted that nowhere does Sharia (or Islamic law) set an age limit for marrying girls: like countless Muslim scholars before him, he relied on Koran 65:4, which discusses marriage to females who have not yet begun menstruating (i.e., are prepubescent) and the fact that Muhammad, Islam’s role model, married Aisha when she was six or seven, “consummating” the marriage—or, in modern/Western parlance, raping her—when she was nine.

The grand point of the Saudi fatwa, however, is not that girls as young as nine can be married, based on Muhammad’s example, but rather that there is no age limit whatsoever.  The only question open to consideration is whether the girl is physically capable of handling her “husband.”  Fawzan documented this point by quoting Ibn Battal’s authoritative exegesis of Sahih Bukhari:

The ulema [Islam’s scholars and interpreters] have agreed that it is permissible for fathers to marry off their small daughters, even if they are in the cradle.  But it is not permissible for their husbands to have sex with them unless they are capable of being placed beneath and bearing the weight of the men.  And their capability in this regard varies based on their nature and capacity.  Aisha was six when she married the prophet, but he had sex with her when she was nine [that is, when she was deemed capable].

Fawzan concluded his fatwa with a warning: “It behooves those who call for setting a minimum age for marriage to fear Allah and not contradict his Sharia, or try to legislate things Allah did not permit.  For laws are Allah’s province; and legislation is his exclusive right, to be shared by none other.  And among these are the rules governing marriage.”

Fawzan, of course, is not the first to insist on the legitimacy of pedophilia in Islam.  Nor is this just some theoretic, abstract point; the lives of countless young girls are devastated because of this teaching.  Recall, for instance, the 8-year-old girl who died on her “wedding” night as her “husband” raped her; or the 12-year-old who died giving birth to a stillborn; or the 10-year-old who made headlines by hiding  from her 80-year-old “husband.”

Finally, it should be borne in mind that Grand Mufti Abdul Aziz—the highest Islamic authority in the land of Islam’s birth—not only dismisses calls to place an age restriction for marriage, but is the same Grand Mufti who called for the destruction of all Christian churches on the Arabian Peninsula (as first reported here).

The consistency makes perfect sense.  After all, in the eyes of non-Muslims, or “non-believers,” Sharia law is nothing less than a legal system built atop the words and deeds of a seventh century Arab, whose behavior—from pedophilia and sex-slavery to war mongering and plundering to destroying non-Muslim places of worship—was very much that of a seventh century Arab.