A new video out of Iran presents the imagined scenario of Jerusalem being conquered by a military alliance of the country’s Revolutionary Guard forces and Hezbollah and Hamas terrorists, a Jewish news site reported Tuesday. 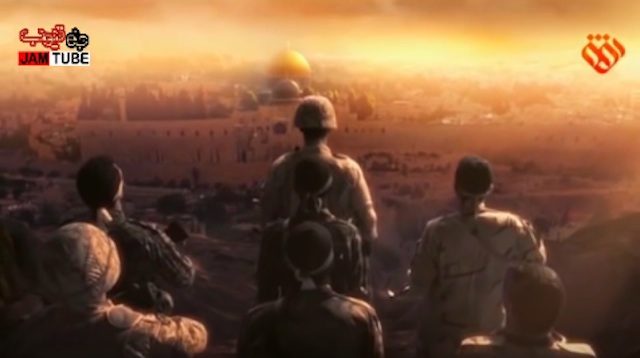 Quoting the Middle East terrorism research organization the Investigative Project, the Algemeiner reported that the video was released two weeks after the Iran nuclear deal was announced.

The video showed the [terrorist] preparing for battle with their gear, headbands, shoes and weapons, then descending on Jerusalem.

Israeli Prime Minister Benjamin Netanyahu has repeatedly pointed to Iran’s continued sponsorship of international terrorist groups including Hezbollah and to its dedication to destroying Israel as two reasons he believes the deal is dangerous for Israel.

The Algemeiner detailed the lineup of [terrorists] portrayed in the video which, according to the Investigative Project, was produced by the Islamic Revolution Design House: “One dons the IRGC [Revolutionary Guards] insignia on his left arm, another the emblem of the Iran-backed Iraqi Shia Badr Organization. Yet a third dons a headband bearing the Lebanese Hezbollah logo, and a fourth is seen clad in Hamas’ characteristic balaclava and the Qassam Brigades green headband.”

The animated video shows the soldiers approaching Jerusalem, with the iconic yellow dome of the Dome of the Rock situated on the Temple Mount, the holiest site in Judaism and third-holiest site in Islam.

Later in the video, a wider shot is presented, showing dozens of [terrorists] on a hilltop across from the holy city.

At the end, Persian script appears saying “Israel must be obliterated,” or literally, “erased from the annals of history … and the youth will definitely see that day when it comes,” the Algemeiner noted.

It’s not only the “Islamic Revolution Design House” that favors destroying Israel. The same sentiment has been expressed recently by Iran’s supreme leader.

Ayatollah Ali Khamenei Tuesday asserted his support for those who fight Israel, tweeting:

In a speech following the nuclear agreement, Khamenei praised Iranian demonstrators who in July chanted “death to Israel” and “death to the U.S.”