Israeli Ambulance Driver: Arab Shot At Me ‘Boldly, Without Shame’ 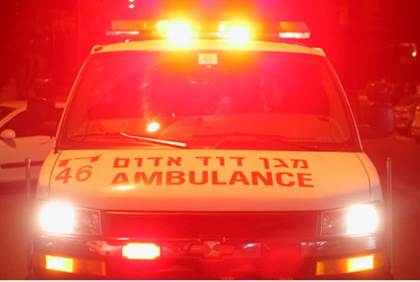 In an interview with Arutz Sheva, Shalom Galil, the ambulance driver who was shot at Saturday night as he was driving along a road adjacent to Beit El in the Binyamin region of Samaria, north of Jerusalem. The traces of at least three direct hits from the bullets were later located on the ambulance, but fortunately no one was wounded in the incident.

“I returned from Ofra, which is a few kilometers north of Beit El,” Galil said. “This was on a new highway that was recently opened. The terrorist was standing outside his vehicle, with the car’s motor running. Without shame, without trying to hide and boldly looking at me, he drew his weapon, and began shooting.”

Asked if he knew what was happening, he said that he did realize that he was being shot at. “You don’t really have a lot of time to think when your window is being shot up,” he said, adding that he really did not suspect that he would be a victim of an attack until the shooting actually started. “I thought it was strange that the Arab was standing outside at night like that. I was planning to call the local security people in the area and report him.”

After shooting at his ambulance and missing, the terrorist began shooting at another vehicle that was driving behind him – and missed in that attack as well. “After that he got into his car and disappeared.”

Galil, who has been driving an ambulance in the region for several years, said that incidents of attacks on ambulances were uncommon. “We get a lot more attacks at the entrances to Jerusalem, where they throw rocks, firebombs, and other things at us. I was told that this was the first time they fired at an ambulance in this area,” he added.

Last month the political echelon ordered the IDF to remove a roadblock leading to nearby Bitin – but the roadblock was returned within 24 hours after an Arab car driving on the road blocked a Jewish car on its way to Beit El, forcing the Jewish driver to swerve to the side of the road.

While that incident ended without any violence, it easily could have been the lead-in to a terrorist attack.