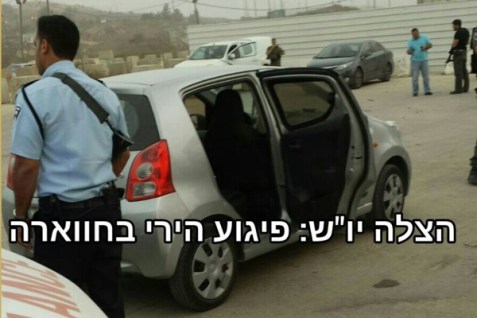 A Jewish woman was lightly injured in a shooting attack at the Bitot junction in the Shomron, which is near Tapuach, south of Shechem. The attack happened just after 6 AM.

Two women in the car, nurses from Yitzhar and Elon Moreh, on their way to work, when the car was shot multiple times.

Thye heard an explosion and thought the car was being hit by rocks.

The passenger was lightly injured in the back. The bullets went through the door of the car.

The IDF is searching for the shooter.

On Tuesday night, a bus was shot at near Maaleh Adumim. The driver was lightly injured by shattered glass.