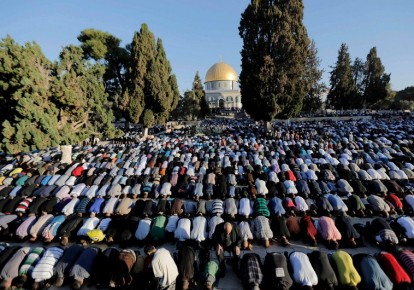 On Sunday, December 21, during the Jewish holiday of Hannukah, Muslim “prayer groups” [it is illegal only for Jews to pray there] intent on harassing Jews on the Temple Mount, Judaism’s holiest site, charged a group of about ten Israeli students and young professionals, threatening them with cries of “Allah Akbar.” However, instead of deterring and detaining the Muslim mob, Israeli police, in the spirit of Western appeasement of Islam, arrested Israeli student Tom Nisani on accusations that he disrupted public order.

Most of the members of the Jewish group who made what turned out to be a frightening visit to Judaism’s holiest site are affiliated with “Students for the Temple Mount”, a grassroots movement that makes it a priority to go up regularly. The group was led by Nisani, a young Temple Mount activist dedicated to restoring freedom of worship and, by logical extension, Israeli sovereignty on the Temple Mount.

After Israel liberated the Temple Mount during the Six Day War, the Israeli political establishment relinquished control back to the Jordanian Waqf Islamic Trust, thereby severely limiting Jewish visitation. Non-Jews are permitted to ascend through one gate at limited hours while Muslims have full access from eleven gates. The Israeli police coordinate security with representative of the Waqf but prohibit Jews from uttering prayers or carrying any religious objects on the Mount.

On Sunday, the Israeli police made the group of Jewish students wait two hours to enter, while anyone not visibly Jewish easily passed the security check with no questions asked.  Jews often have to undergo lengthy security screening before being allowed to enter. After the security briefing, in which the group was warned not to pray, Nisani asked the Israeli policeman if he was allowed to “pray in our heart.” The policeman evaded the question.

Immediately upon entering, the “Allah Akbar” welcoming committee made their presence known and latched onto the group of students. (“Allah Akbar” – Allah is the greatest – is the Muslim chant often yelled before committing a terrorist attack). The students sat down on a vacant plaza as the chants got louder. The angry mob of Muslim men, women and even children eventually descended upon them, surrounding them, shouting at them, while the police meekly made a ring around the would-be Jewish worshippers.

Nisani wanted to remain seated on the floor, expecting the police to control the mob. The mob seemed intent in causing harm, and the police eventually escorted the Jews away from them even as an elderly Muslim woman struck Nisani on the back (as seen in the video; Nisani is wearing the white kippah). Avoiding a confrontation with the mob, Israeli police arrested Nisani on accusations of disrupting public order. Nisani spent overnight in detention in a Jerusalem jail. He was released after a hearing the next day and was ordered to stay off the Mount for 21 days.

“It‘s my right and our right to go up on the Mount without being attacked and humiliated,” Nisani said on his Facebook page, referring also to Israeli law which must ensure access to Jewish visitors. He intends to file complaints against the arresting officers for illegal arrest and improper police behavior.

With visits to the Temple Mount trending, Muslims are becoming increasingly hostile to Jews on the Temple Mount. This hostility culminated with the October 29 attempted assassination of Rabbi Yehuda Glick, a Temple Mount activist who campaigns for freedom of worship on the Temple Mount. Glick miraculously survived four bullets shot point-blank by an Arab Muslim terrorist. Glick has served as a guide for Students for the Temple Mount and other groups engaged in this democratic struggle for religious freedom. Death threats against activists like Nisani continue unabated – as does his persistence to ensure Jewish civil rights on the site of great historic and religious significance for Jews.

“Whoever does not yet understand,” Nisani wrote on Facebook, “now is the time to up to the Temple Mount, and no later! Go up en-masse and do not fear arrest or harassment.”