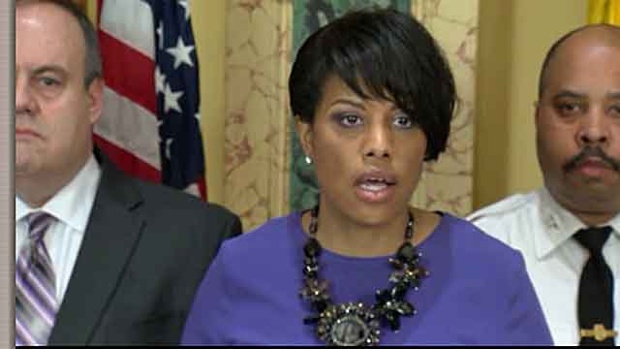 Gray’s death, no matter how it came,  was the excuse—not the reason—for rioters to take to the streets.

Rent-a-Mob recruiting went out on social media.  Rioters from outside were flooded in to Baltimore, and you can depend on them not having to thumb a ride to get there.  Mayor Stephanie Rawllngs-Blake gave them their “space” by calling for a police stand down.  The stage was set.

The pattern for racial unrest is etched blood red in Baltimore, Ferguson, New York—and in other cities to come.  The pattern is patently visible to any with their eyes open to see.

television was holding some 17 million viewers enrapt with the transgender transition of 65-year-old, Kardashian-inspired Bruce Jenner and with other sensationalized ‘news’, the Lib-Left was standing down for open season on the police.

Not only is the possibility of getting injured or killed on duty destined to thin out the ranks of the blue line, politicians exaggerating the image of police brutality now seek to saddle them with body cameras.

The body cameras they want to foist on officers may as well be printed out with signs that read, “I am a police officer, I cannot be trusted”.

Before it’s all over cartoonists will depict cops carrying bananas rather than guns in their holsters.

Will confirmation of Freddie Gray’s “intentionally trying to injure himself” quell the mobs that pillaged and burned in Baltimore?

“A prisoner sharing a police transport van with Freddie Gray told investigators that he could hear Gray “banging against the walls” of the vehicle and believed that he “was intentionally trying to injure himself,” according to a police document obtained by The Washington Post.

“The prisoner, who is currently in jail, was separated from Gray by a metal partition and could not see him. His statement is contained in an application for a search warrant, which is sealed by the court. The Post was given the document under the condition that the prisoner not be named because the person who provided it feared for the inmate’s safety.

“The document, written by a Baltimore police investigator, offers the first glimpse of what might have happened inside the van. It is not clear whether any additional evidence backs up the prisoner’s version, which is just one piece of a much larger probe.

“Gray was found unconscious in the wagon when it arrived at a police station on April 12. The 25-year-old had suffered a spinal injury and died a week later, touching off waves of protests across Baltimore, capped by a riot Monday in which hundreds of angry residents torched buildings, looted stores and pelted police officers with rocks.

“Police have said they do not know whether Gray was injured during the arrest or during his 30-minute ride in the van. Local police and the U.S. Justice Department both have launched investigations of Gray’s death.”

The outcomes of any inspections, no matter how valid, will get no respect from the Baltimore rioters.  They could be shown video of Grey severing his own spinal cord, but it wouldn’t matter.

Protesters taking to the streets to loot and burn don’t want the truth—they want anarchy for the ultimate breakdown of civil society.

Rioters, who will be called away to the next city to protest alleged police brutality and who got their “space” from Mayor Rawlngs-Blake, will be looking for it again.

Honest,  small business owners who pay the mayor’s freight got to see the businesses they built with their own sweat and hard work reduced to ashes overnight.

Reuters reported that 19 buildings and 144 vehicles were damaged in the riots and 20 police officers were injured.

What were the Obamas and their chief mentor, Valerie Jarrett, doing while folk were losing their livelihoods on Tuesday night?  Gorging on Wagyu steak at a dinner honoring Japanese Prime Minister Shinzo Abe.

What do civil rights activists like Al Sharpton and Jesse Jackson do every time another American city is hit by devastating racial riots?

Make money on them.

It’s not the rioters and thugs the politicians of the day want off the streets of America, it’s the cops.