Jeb Bush at Border: Promises in Spanish ‘not a residency but citizenship’ 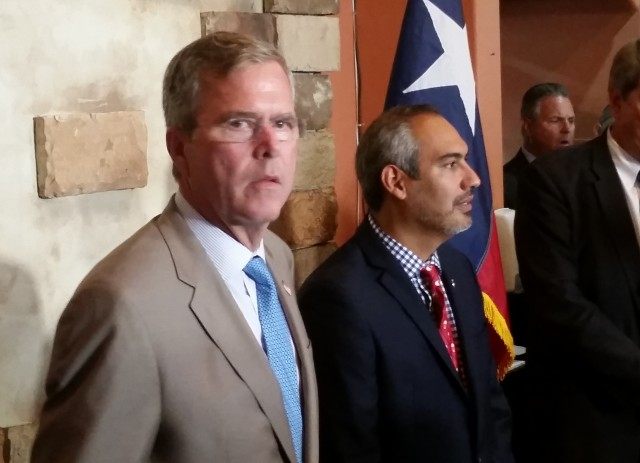 “I, as President, I would go to congress and change the law to give them not a residency but citizenship,” Bush said in Spanish during a meeting attended by this writer.

The statement was made Monday afternoon at the Palenque Grill in this border city where patrons lined up to take photographs and shake hands with Bush.

When asked about the Dreamers, Bush said he did not agree with President Barack Obama’s approach by forcing an executive action, but instead, he said he would work with the U.S. Congress to pass a comprehensive immigration reform.

“You have to have a much deeper strategy than just building a fence, you have to have much more coordination with local law enforcement. There has to be more focus on a virtual fence which I propose as to using GPS technology, drone technology and other things like that,” Bush said during the event.

Prior to arriving at the local restaurant, Bush met with local officials to speak about border security issues in the area. This area, as previously reported by Breitbart Texas, has been the epicenter of an immigration crisis where hundreds of thousands of illegal immigrants from Central America have arrived to the area turning themselves in to authorities in order to be released with a notice to appear in court.

“Border Patrol needs to act on a strategy and stick with it,” Bush said. “There’s too much politicizing. They do good work, but there’s too much influence form Washington DC to be effective.”

During the appearance, Bush was asked about Donald Trump’s call for a border wall and about the immigration proposals put forth by the current presidential frontrunner.

“His plans are not grounded in conservative principles. They will cost hundreds of millions of dollars. It’s not realistic,” Bush said. “My belief we can have a comprehensive border security strategy unique to the circumstance of each part of this region.”

Multiple Spanish news outlets and CNN called out Bush for his use of the term “anchor babies” to which he said he would not apologize because he was referring to a fraudulent practice used by certain people “primarily Asian” looking to take advantage of the laws.

“Everybody needs to chill out,” the candidate told the angry news outlets stating that there was too much political correctness and that was hurting any healthy debates.