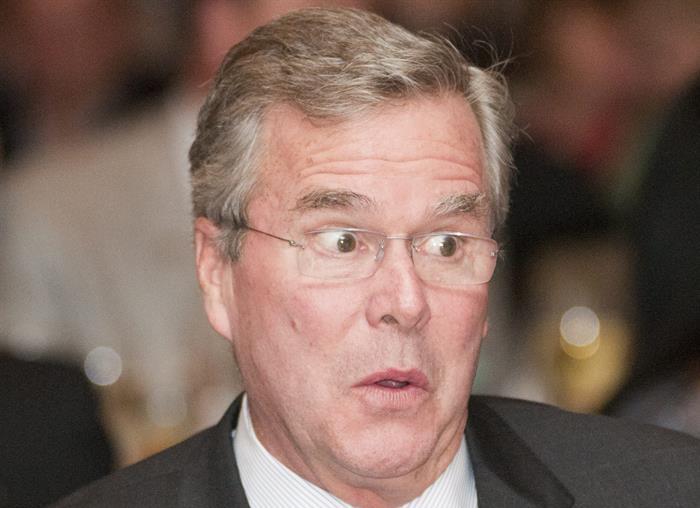 At a national security forum in the early voting state of South Carolina, Bush put himself at odds with Republican congressional leaders who earlier this year voted to end the National Security Agency’s bulk collection of phone records.

The former Florida governor said Congress should revisit its changes to the Patriot Act, and he dismissed concerns from civil libertarians who say the program violated citizens’ constitutionally protected privacy rights.

“There’s a place to find common ground between personal civil liberties and NSA doing its job,” Bush said. “I think the balance has actually gone the wrong way.”

Bush also said the U.S. should send more troops — he didn’t say how many — and equipment to eastern European nations in response to Russia’s increasingly aggressive posture in the region. He said Russian President Vladimir Putin should know that his “adventurism” comes with “a price to pay.”

“Rather than reacting to the bad behavior, I think we need to be more forward-leaning as it relates to what the consequences will be,” Bush said.

The remarks were part of Bush’s ongoing efforts to pitch an aggressive foreign policy as he struggles to break out of a crowded Republican presidential primary in which businessman and former television reality star Donald Trump has garnered much of the attention.

Pushing a hawkish foreign policy is a staple of Republican presidential politics. The exception is Kentucky Sen. Rand Paul, and even the libertarian-leaning senator has refused to take military action off the table as he argues for a reduced American footprint around the world.

Yet for Bush, the discussion comes with particular challenges as he tries to distance himself from former President George W. Bush, the candidate’s brother, who signed the Patriot Act into law and oversaw the 2003 invasion of Iraq.

Congress voted in June to end the bulk collection of American phone records under the Patriot Act, a controversial program that NSA contractor Edward Snowden disclosed publicly in 2013. The Obama administration announced recently that the agency later this year would destroy all the remaining records that already had been collected.

Bush doubled down Tuesday on his assertions that there is “no evidence” the data collection violated civil liberties. “I’ve found not one” case, he said.

The Privacy and Civil Liberties Oversight Board, an independent bipartisan agency, declared NSA’s phone records collections program illegal in 2014, and a federal court of appeals reached the same conclusion earlier this year.

A May analysis from the Justice Department found that FBI agents interviewed by the inspector general’s office “did not identify any major case developments” that came from using Section 215 that allowed the bulk records collection.

Bush also criticized private technology firms for using encryption to make it harder for their customers to be surveilled. “It makes it harder for the American government to do its job while protecting civil liberties to make sure evildoers aren’t in our midst,” he said.

Noting that companies like Google are getting pressure from customers, Bush said “market share … should not be the be-all-end-all,” and he called for “a new arrangement with Silicon Valley in this regard.”

In outlining his policy toward Russia, meanwhile, Bush suggested his approach isn’t too aggressive and, in fact, is a U.S. duty as a member of NATO.

“It’s not being bellicose to say what you’ll do if someone acts in a way that creates a threat to your allies,” he said. “That’s not warmongering.”

Quite the opposite, Bush concluded: “History is full of examples of appeasement, pulling back and creating greater risk than standing up for your friends and allies.”