Jews attacked by masked Arab terrorists while hiking in Samaria 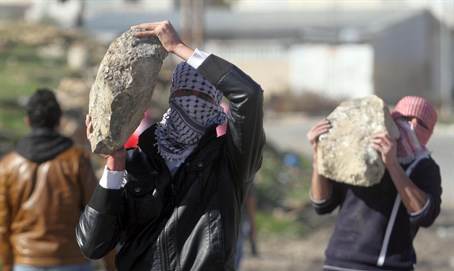 Masked Arabs on Saturday stoned a group of Jews hiking near the Arab town of Kafr Maadma in Samaria.

The Arabs approached the Jews, continuing to stone them, and the Jews responded by throwing rocks of their own. IDF soldiers who were at the scene used crowd dispersal techniques to disperse the Arab attackers.

Otzma Yehudit CEO Tzvi Sukkot said, “For several weeks, Samaria residents have fallen victim to the Arabs’ rage. We will continue hiking in the area, and we will continue to show a strong presence.”

“We expect the security forces to prosecute to the fullest extent of the law the rioters who attacked us and the soldiers.”

On November 30, children on an IDF-approved bar mitzvah trip were hiking near Migdalim. As the children were hiking, an Arab mob, mostly from the town of Qusra, attempted to lynch the children. The accompanying parents, who were acting lawfully as armed escorts, shot at the Arab terrorists, killing one of them.