Former US Pres. and Jew-hater Jimmy Carter is again working to destabilize the security of Israel in a ninth-hour appeal to outgoing President Obama. 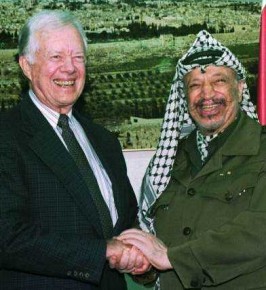 Former U.S. President Jimmy Carter is urging incumbent President Barack Obama to support an anti-Israel resolution at the United Nations Security Council that would allow the Palestinian Authority to evade its obligation to negotiate a final status agreement and skip directly to independent statehood.

The obligation to negotiate via direct talks with Israel was enshrined in the internationally-recognized Oslo Accords signed between Israel and the Palestinian Authority in the early 1990s. But the Ramallah government has spent the intervening years working to avoid its contractual obligations — the first of which mandate the abolition of incitement to violence and terror against Jews and Israelis and demand direct talks to negotiate a final status agreement.

Instead, representatives for the Palestinian Authority made monumental and successful efforts to evade those responsibilities via proxies in the United Nations General Assembly who helped the entity to methodically upgrade its status unilaterally at the world body without having to negotiate at all.

Now Jimmy Carter, known for years as an advocate on behalf of Gaza’s terrorist leadership and that of the Palestinian Authority in Ramallah, is once again intervening to use his influence in the region.

This time, Carter wrote an op-ed in The New York Times to urge an outgoing president to use his final days to sell out America’s most loyal Middle Eastern ally at the UN.

“It has been President Obama’s aim to support a negotiated end to the conflict based on two states, living side by side in peace,” Carter wrote. “That prospect is now in grave doubt. I am convinced that the United States can still shape the future of the Israeli-Palestinian conflict before a change in presidents, but time is very short.

“The simple but vital step this administration must take before its term expires on Jan. 20 is to grant American diplomatic recognition to the state of Palestine, as 137 countries have already done, and help it achieve full United Nations membership.”

Carter also wrote that security guarantees “for both Israel and Palestine are imperative,” as if that were actually possible. Further measures, he wrote, “should include the demilitarization of the Palestinian state” but did not suggest how that might take place.