Jonathan Pollard to be paroled November 20 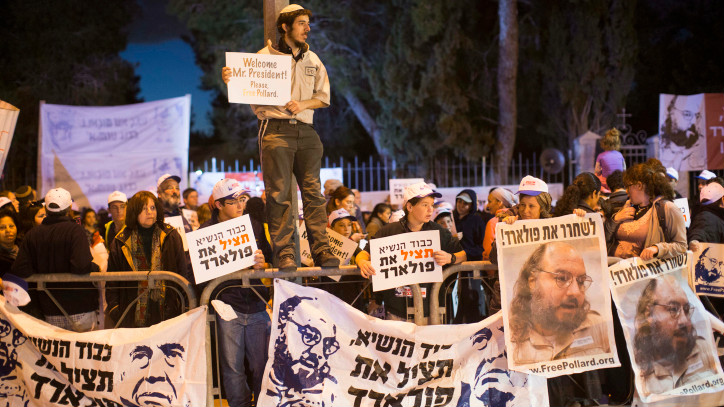 Lawyers for former US Navy analyst pass on his thanks to supporters, urge Obama to allow him to leave US for Israel.

Jonathan Pollard, the former civilian analyst for the US Navy convicted of spying for Israel, will be released from US jail on November 20 after serving 30 years of a life sentence.

“The decision to grant parole was made unanimously by the three members of the [US] Parole Commission, who make their decisions independently of any other US government agency,” Pollard’s lawyers said in a statement. “The decision is not connected to recent developments in the Middle East.”

Pollard was formally eligible for parole on November 21, but will be freed a day earlier — Friday the 20th — as the 21st is a Saturday.

Under the terms of his parole, Pollard will not be able to leave the US for five years, Channel 2 said, although President Barack Obama can overrule this condition.

His lawyers, Eliot Lauer and Jacques Semmelman, have asked Obama to intervene and allow Pollard to leave the country and relocate to Israel, the Wall Street Journal reported.

“We respectfully urge the president to exercise his clemency power in this manner,’’ the lawyers said.

Through his lawyers, Pollard also thanked supporters who had long fought for his release.

“Mr. Pollard would like to thank the many thousands of well-wishers in the US, in Israel and throughout the world, who provided grass-roots support by attending rallies, sending letters, making phone calls to elected officials and saying prayers for his welfare. He is deeply appreciative of every gesture, large or small,’’ the lawyers said.

“It’s a miracle,” Pollard’s former wife Anne told Channel 2 on Tuesday evening, shortly after news broke of his parole. “I just heard officially that this was true.” She said she knew nothing about the terms of his release.

Once he is released he will want to move to Israel “100 percent,” she had said in a previous interview, on Saturday, “otherwise nothing would make sense to him.”

“I just want to see him out, I can’t bear it anymore, that he sat and lost all of his life in jail, it’s a crime, it’s such a crime,” she said.

The Wall Street Journal had reported Friday that the Obama administration was preparing to release Pollard in hopes of alleviating tensions with Israel over the [terrorist] Iranian nuclear deal.

… Pleading for his release, Anne Pollard said Saturday her former husband had done everything the prison authorities asked of him, had a history of “good behavior,” and is “very, very ill.”

It was heartbreaking, she said, that he had spent his whole life sitting in jail. “I can’t bear it any more,” she said.

Israeli government officials — including Prime Minister Benjamin Netanyahu himself — activists, and even members of Congress have for decades lobbied successive US administrations for Pollard’s release.

There have been several reports in US media in recent months alleging that Pollard may be released later this year.

The 61-year-old Pollard is serving a life sentence in a US federal prison for passing classified information to Israel; he was granted citizenship by Israel 20 years ago.

Although Pollard is serving a life sentence under a Federal law that allows the possibility of parole, he is the only American citizen who has been sentenced to life in prison for passing classified information to a US ally.

The US had at times considered releasing Pollard in the past, but was met with fierce opposition by some in the CIA, the FBI and the Justice Department.

During his farewell visit as president of Israel to Washington DC last year, Shimon Peres pressed Obama for Pollard’s release.

In August 2014, a request by Pollard for parole was denied, with the officials arguing that releasing Pollard would “constitute contempt for the severity of the offense and promote a lack of respect for the law.”