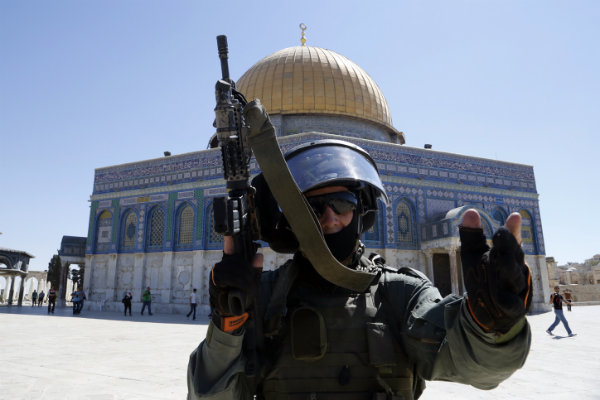 The government of Jordan warned Israel on Sunday there would be “grave repercussions” if Jews continue to ascend to the Temple Mount to visit Judaism’s holiest site over the Passover holiday.

“Minister of State for Media Affairs and Communications Mohammad Momani said the violations by the Israeli occupation forces and settlers against worshipers at Al Aqsa Mosque / Al Haram Al Sharif constitute a breach of international laws and conventions, warning that such practices will lead to grave repercussions.”

The minister, who also serves as spokesperson for the Amman government, told the official Petra News Agency in a statement that Jordan “called on the occupation forces to immediately cease such practices and to prevent Israeli settlers and occupation forces from entering the yards of the holy mosque.”

Momani also “called on the occupation forces to allow Palestinian worshipers to enter the holy mosque and to allow them to perform their religious rituals… Occupation authorities have increased security in Jerusalem for the eight-day Passover festival, during which thousands of Jews come to the city to celebrate,” he added.

Any Israeli Jew — in fact, any Jew — is defined as a “settler” — by most Arab officials. The Israeli government is always referred to as the “occupation forces” and the site of the Temple Mount in its entirety, grounds and all, is referred to as the “Al Aqsa Mosque / Al Haram Al Sharif.”

Jordan seems somehow to forget that its own forces just barely occupied the ancient site for the blink of an eye, less than two decades (1948 to 1967).

The lives of the People of Israel have been intimately interwoven with its history for millenia — as proven by the archaeological artifacts constantly being discovered even in today’s dust.

None of this is new, and in fact it is getting really, really old.

Jordan has never really accepted these facts – nor has the rest of the international community – or for that matter, the reality that Israel reasserted its ownership over the territory because it won the defensive war forced upon it by its hostile Arab neighbors, including Jordan, in 1967.

That, despite Israeli officials repeatedly having warned Amman to stay out of the conflict in order to avoid having to fight a neighbor with whom relations were more or less neutral, if not positive.

The fact that the government of Jordan had used much of Judaism’s holiest site, Islam’s “third holiest site” as a latrine and garbage dump simply escapes international memory.

Had the so-called Jewish “invaders” back then and today been Da’esh (ISIS) fighters the holy site probably would have been obliterated and there would be nothing to discuss.

Instead it was the Jewish State who extended its hand in peace and conciliation. Israel offered the Jordanian Islamic Waqf control over the Temple Mount area despite its status and Judaism’s holiest site and kept complete control over the Western Wall for Israel.

And Jordan has proved itself to be among those of the Biblical Ishmael: as is the nature of Arab nations, the hand offered in peace was bitten and then swallowed up to the elbow. Today the Temple Mount has become a safe zone for Muslim clerics to freely incite against Israel and Jews.