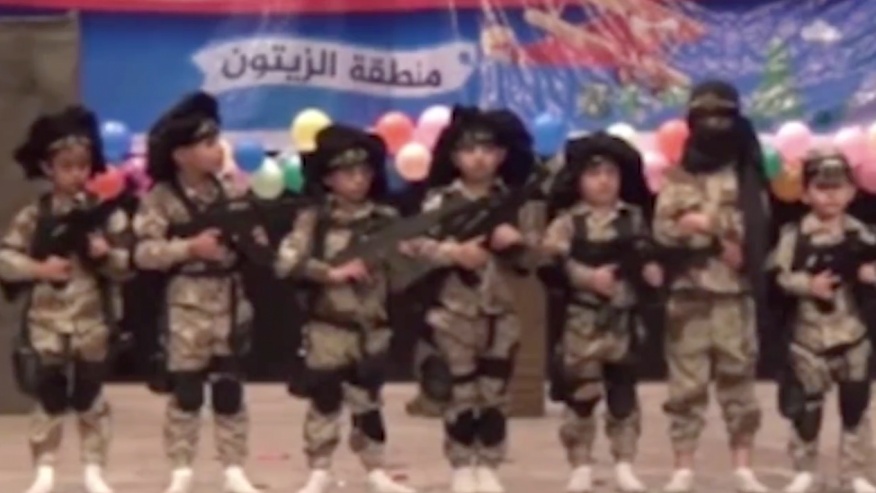 “Stab! Kill the occupier [Jews] with stones and knives.”

Disturbing video has surfaced of a kindergarten graduation ceremony in Gaza that looks more like a terrorist training video rather than five-year-olds picking up a diploma for learning their ABCs.

Posted by The New York Post, the children can be seen doing various military training drills, bombings, and kidnapping. The teen-aged emcee can be heard saying, “Stab! Kill the occupier with stones and knives.”

The kids are dressed in military fatigues and tactical gear, carrying, hopefully, fake machine guns. They breach doors, throw grenades, and run around the stage acting out war scenes with cardboard tanks and other props.

And the indoctrination is working, because these kids are growing up and becoming the terrorists they are taught to portray. A recent story out of the West Bank tells of a Palestinian teen, just 15, who sneaked into a Jewish settlement with a knife and killed a wife and mother in her own kitchen. Reports say it took just 20 seconds and the woman “struggled to keep the knife insider her, so he couldn’t use it against the children.”

She was stabbed three times to her body and once in the head.

In the last eight months, young Palestinian men have launched attacks on Israeli soldiers and citizens, killing at least 30, including two Americans. The Washington Post states that the violence has slowed since March, but attacks are becoming “incredibly intimate — face-to-face.”