Leftist attack against synagogue in Tel Aviv – Where’s the outcry?

A Tel Aviv synagogue was vandalized Sunday with graffiti reading, “In a place where the Jewish State Bill will be legislated, books will be burned.” 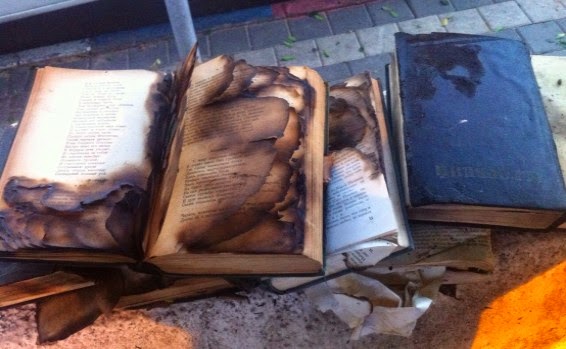 The vandals left a pile of burned books next to the wall that bore the graffiti. The books are not sacred texts.

The attack took place at the The Tel Aviv International Synagogue where Ariel Konstantyn of the Orthodox Zionist Tzohar Rabbis organization, originally of New York, serves as rabbi. Rabbi Konstantyn says the incident has been referred to the police but he views it as a “clear act of anti-Semitism.” According to the rabbi, the timing of the attack and the explicit graffiti seem to indicate that this was perpetrated by radical left-wing activists.

Rabbi Konstantyn expressed his shock saying “It is ironic and shocking that they targeted a synagogue where every perspective is respected and welcomed and where Jews are taught to love each other regardless of their political views.”

The rabbi pointed out that the founding of the International Synagogue was as initiative of the Tzohar Rabbinical Organization as a hub of inclusive outreach to the greater Tel-Aviv community. Over the past few years the synagogue has hosted Shabbat & holiday programs for thousands of Jews from all walks of life and political backgrounds.

Ah, so they burn books as a preventative measure to stop their opponents from burning books, a threat that only exists in their most antisemitic fantasies.

But since they are apparently from the Left, we won’t be seeing any Reuters or NYT articles on this house of worship being vandalized. We need to be “tolerant” of the intolerant leftist haters of Judaism, especially the Jews.

I find it interesting that this attack was so well planned that the arsonists had created a stencil ahead of time to leave their little threat.