Limbaugh: “Who Knew” Trump Would “Convert the GOP Base to Supporting Amnesty”? 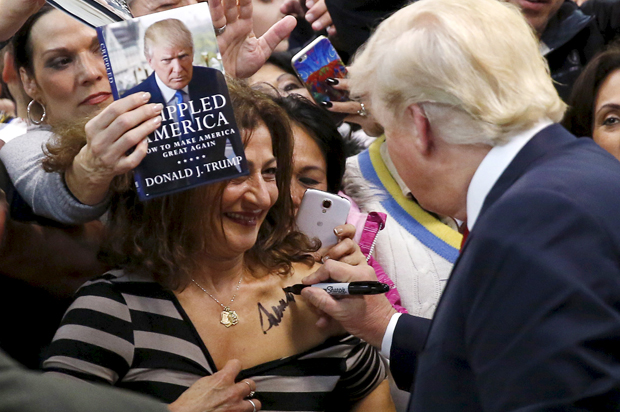 Because with Trump supporters, it’s not about the issues, the constitution, or conservatism… it’s about idol worship of a rich liberal TV reality star.

An amazed Rush Limbaugh took to radio Thursday to voice his surprise over Donald Trump’s softening of his position on illegal immigration to a stance many critics have asserted is “amnesty.”

“Could you imagine what it’s like to be Jeb Bush today?” the radio host said laughing. “Who knew?”

Limbaugh went on to say establishment Republicans tried to convince the base — through Bush, Florida Sen. Marco Rubio and the Gang of Eight — “to support some form of amnesty for illegal immigrants,” but it failed.

The conservative talker continued, per the transcript on his website, even taking a jab at conservative commentator Ann Coulter, a staunch Trump supporter who just authored the book, “In Trump We Trust“:

Let me regain my composure. Who knew that it would be Donald Trump to come out and convert the GOP base to supporting amnesty the same week Ann Coulter’s book comes out. Poor Ann. Oh, my God, she’s got this book, ‘In Trump We Trust,’ and in it she says the only thing, the only thing that could cause Trump any trouble whatsoever is if he flip-flops on abortion or on immigration, goes amnesty. It looks like he’s getting close to it, and she’s just beside herself with this. I mean, what timing.

Trump began softening his approach to immigration reform, which has been the centerpiece of his candidacy, earlier this week during a town hall event with Fox News’ Sean Hannity, a staunch support of the billionaire businessman. During the discussion, he said he is open to “softening” his approach because he’s “not looking to hurt people.”

But Limbaugh doesn’t believe the shift will hurt Trump with his supporters.

“That’s why I say who knew that it would be Donald Trump to come along and convert the GOP base to supporting amnesty? I don’t see a lot of people preparing to abandon Trump over this. Maybe Coulter. Who knows what she’s gonna do. I mean, her book hits, and it’s just had the rug pulled out from under it.”

Earlier this week, Coulter told MSNBC’s Chris Matthews that it is a “mistake” for Trump to soften his approach to immigration.