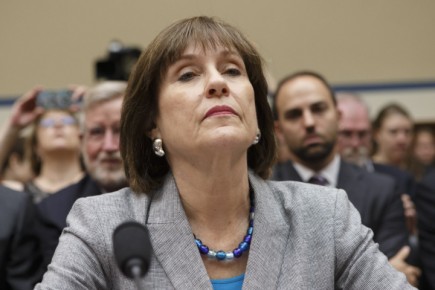 Former IRS official Lois Lerner received $129,300 in bonuses between 2010 and 2013, records obtained through the Freedom of Information Act show.

Over a three-year period, Lerner, the head of the tax-exempt division at the heart of the IRS targeting scandal, received a 25 percent retention bonus—averaging $43,000 a year—on top of her regular salary.

The federal government uses retention bonuses to incentivize valuable employees who are considering retirement or private sector jobs to stay at their agencies.

“Ms. Lerner is eligible for retirement and as an attorney with extensive experience would likely command a much greater pay and benefits if she left the Service,” Miller wrote. “Without a retention incentive she will leave the Service.”

Miller said that there was no senior official ready to take over the position if Lerner left, and that “her unique blend of specialized technical expertise, broad organizational knowledge, and leadership skills cannot be matched.”

Joseph Grant, the deputy commissioner of the tax-exempt division, approved the bonus. The second-level review of Lerner’s retention bonus was approved by Miller himself.

Both officials signed off on annual renewals for Lerner’s retention bonus in 2011 and 2012. Both officials would also later resign in connection with the targeting scandal.

In November 2012, the IRS informed Lerner that her retention bonus was being suspended because her total estimated earnings for the calendar year had exceeded the aggregate limit for federal employees: $230,700.

The IRS notified Lerner in a March 10, 2013, email that it was canceling her retention bonus.

On May 10, 2013, Lerner revealed in response to a planted question during a speech at the American Bar Association that the IRS had singled out groups applying for tax-exempt status that had “tea party” or “patriot” in their names.

The Treasury Inspector General for Tax Administration released a report on May 14, 2013, finding that the IRS “used inappropriate criteria that identified for review Tea Party and other organizations applying for tax-exempt status based upon their names or policy positions instead of indications of potential political campaign intervention.”

Lerner retired in September 2013, ensuring that she receives a full federal pension.

But at least the IRS filled out all the proper paperwork for Lerner’s retention bonus. Other agencies have been less diligent. An Environmental Protection Agency Inspector General investigation found that 11 EPA employees received nearly $500,000 in unauthorized retention bonuses between 2006 and 2013.