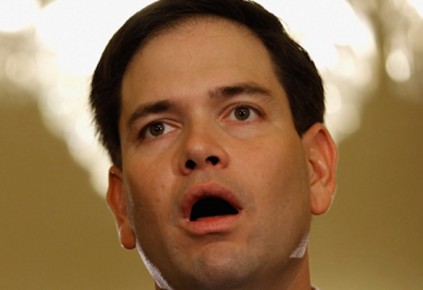 As the 2016 presidential race begins to heat up, candidates from both major parties are already jockeying for position on key political issues. One of the most talked about one concerns all Americans: privacy and how successive presidential administrations have interpreted their own power and statutory law to permit widespread electronic surveillance by the National Security Agency.

In recent days, the issue has come up again as Congress considers whether to reform a controversial provision of the USA Patriot Act or simply allow it to expire.

Various candidates have mostly expressed support for the NSA and the authority given to the agency by the Bush and Obama administrations to conduct overly broad electronic surveillance and the collection of Americans’ phone metadata.

Sen. Marco Rubio, R-Florida, has been viewed favorably by a number of Republicans, but on the issue of widespread NSA spying, he is wrong. In a recent op-ed for USA Today, he claimed that there has been “not a single documented case of abuse” resulting from the program while arguing for it to continue.

“The government is not listening to your phone calls or recording them unless you are a terrorist or talking to a terrorist outside the United States,” he writes.

“In fact, this program has been found legal and constitutional by at least 15 federal judges serving on the FISA Court on 35 occasions,” he continued.

What he doesn’t say is that the FISA court he cites meets in secret, only hears cases presented by government lawyers representing U.S. spy agencies, is not staffed with federal judges who have any particular background in intelligence, and almost never refuses a government request for a warrant.

Meanwhile, Hillary Clinton, who as a U.S. senator from New York voted with 97 other senators to approve the Patriot Act, recently dodged a question about whether she supports the NSA’s wide surveillance.

During a recent Q & A, Clinton was asked by technology journalist Kara Swisher, “Would you throttle back the NSA in the ways that President Obama has promised but that haven’t come to pass?”

Well, I think the NSA needs to be more transparent about what it is doing, sharing with the American people, which it wasn’t. And I think a lot of the reaction about the NSA, people felt betrayed. They felt, wait, you didn’t tell us you were doing this. And all of a sudden now, we’re reading about it on the front page…

So when you say, “Would you throttle it back?” Well, the NSA has to act lawfully. And we as a country have to decide what the rules are. And then we have to make it absolutely clear that we’re going to hold them accountable.

First, the NSA can’t be more transparent or share with the American people. It’s a spy agency; it is designed to operate in secret. If anyone should be “more transparent” about what the NSA is doing, it is the presidents and politicians who task it.

Second, “the country” did “decide what the rules are” long ago with the adoption of the Constitution and its Fourth Amendment privacy guarantees and Fifth Amendment due process requirements. The people, through their representatives, wrote and passed the Patriot Act. Provisions of it might have been misinterpreted (intentionally or otherwise), and this can be blamed either on Congress for failing to make such provisions clearer or the executive branch for misapplying its statutes. Her Obama-like excuse that she didn’t know about this until she read it in the newspaper doesn’t wash given her intimate knowledge of how government works and her position as an Obama Cabinet secretary.

Third, for those unfamiliar with executive branch policymaking, the NSA does not make up its own rules as she suggests. The agency’s director does what the president tells him to do. The president, meanwhile, takes his authority to act in the national security interests of the country via his Article 2 powers as commander-in-chief and from statutory law (in this case, the Patriot Act).

In short, the people in government who are now trying to convince you they were in the dark have always known what the NSA was doing. The NSA was doing what it was tasked to do; Rubio knows that, Clinton knows that, the congressional oversight committees know that, Bush knew that and Obama knows that.