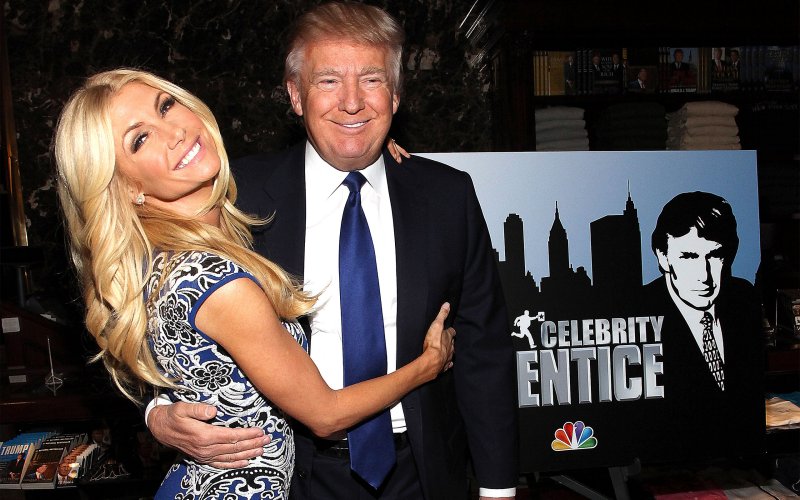 Donald and Melania were already wed at the time. That didn’t stop him from insisting over and over that he wanted this Celebrity Apprentice ‘as his wife.’

During the 13th season of The Apprentice, Donald Trump infamously told celebrity contestant and Playboy Playmate Brande Roderick that it “must be a pretty picture, you dropping to your knees.”

That was the oral-sex joke that made it to air on NBC; what didn’t was two seasons worth of Trump telling Roderick he wanted to “marry” her and talking about how badly he wanted to “f–k” the Playboy model with the “perfect body” and gorgeous “t–s,” three former Apprentice employees tell The Daily Beast.

“[Trump] kept proposing to her and telling her how beautiful she was. I think he was trying to be charming,” said one Apprentice staffer, recalling Trump’s words with Roderick during The Apprentice’s eighth season—the second edition of Celebrity Apprentice. The staffer spoke on the condition of anonymity due to strict nondisclosure agreements those working on the TV production had to sign. “When he invited her back for another season [of The Apprentice], he kept asking repeatedly again, saying he wanted her as his wife. It was typical Donald… [and] creepy.”

At the time of both seasons, which aired respectively in 2009 and 2013, Trump was married to wife Melania, a former model who got hitched to the mogul in 2005. Trump’s reign during the Celebrity Apprentice era of the show is already marred by multiple accounts of scandal, questionablemanagement, and Trump’s own offensive remarks and obscenities.

Roderick’s stint on the 2013 season of Celebrity Apprentice made political news two years later, when Fox News host Megyn Kelly asked Trump during the first Republican primary debate about an incident broadcasted on his NBC series.

The remark came after contestant Bret Michaels described how Roderick had gotten down on her knees and begged not to be fired. Trump, seated across the table from them in the show’s “boardroom,” quickly zeroed in on that image and cut in by asking, “Excuse me, you dropped to your knees?”

When the cameras weren’t rolling, Trump’s language and comments on the Playboy model would get more graphic.

“I would f–k her, take her now,” another source recalls Trump saying during production, saying that the “marriage/flirting stuff” was also a recurring thing.

“He would say really gross shit about her all the time, sometimes in the boardroom—that he said these things about her was the least surprising thing, really,” the ex-staffer continued. “He would comment all the time saying how ‘incredibly beautiful’ she was, with this ‘gorgeous and perfect body.’ He kept leering after her the whole time she was on for [that 13th] season. She definitely became something of a sexual obsession to him, and everyone could see it… Again, that wasn’t shocking to anyone on the show. At that point, after many years, it was just him being Trump.”

The former staffer commented that Trump’s observations of Roderick’s backside and breasts seemed almost pervasive, a point that was corroborated by colleagues.

“He definitely said crude, awful things about her fairly frequently, no doubt,” another Apprentice alumnus told The Daily Beast. “I can’t remember exact [full] comments he made, but ‘f–k’ and ‘tits’ came up a fair amount.”

Roderick, for her part, didn’t appear to hold a grudge against her pal Donald, at least as of last year.

In August 2015, following the Republican debate where her story came up, Roderick quickly defended Trump, telling Inside Edition, “I kind of let it go in one ear and out the other because I’ve never had a negative experience with Donald.”

Roderick also claimed to have no memory of Trump’s lewd comments.

“I actually didn’t even remember him saying that,” Roderick said on MSNBC last year.

“He’s never been disrespectful to me,” Roderick claimed. “I don’t condone men being derogatory, but I think he was just—he’s on television, he’s trying to be funny. I don’t think that he meant anything horrible by it.”

The Trump campaign and Roderick’s publicist did not immediately respond to requests for comment on this story.

In recent weeks, there has been plenty of reporting on derogatory comments Trump has made over the years—some on The Apprentice, some off. (To say nothing of the flood of fresh sexual assault and harassment allegations following the release of the Republican presidential nominee’s now-infamous videotaped boast that he could “grab [women] by the p—y” and get away with it due to his celebrity status.)

“We were in the boardroom one time figuring out who to blame for the task, and [Trump] just stopped in the middle and pointed to someone and said, ‘You’d f–k her, wouldn’t you? I’d f–k her. Come on, wouldn’t you?’” a former crew member said. “Everyone is trying to make him stop talking, and the [female contestant] is shrinking in her seat.”

And Roderick is hardly the only celebrity apprentice at whom Trump apparently hurled demeaning or insulting language. Three Apprentice staffers told The Daily Beast that Trump repeatedly demeaned Marlee Matlin, an Oscar-winning actress who competed on the show’s 11th season, as being mentally “retarded”—all because she was deaf. In the 2013 season (the same one that featured the “on your knees” comment), Trump repeatedly referred to rapper and contestant Lil Jon as an “Uncle Tom”—even after several producers begged him to stop, three staffers told The Daily Beast.

Trump also condoned some horrific behavior on the set, multiple former staffers told The Daily Beast. When actor Gary Busey allegedly sexually assaulted someone on The Apprentice, Trump laughed it off. Earlier this month, Summer Zervos, a former contestant on Season 5 of The Apprentice, accused Trump of sexual assault, claiming that he “thrusted” his “genitals” on her.