Mass Jordan Protests: ‘Stab the Son of the Jewess’ 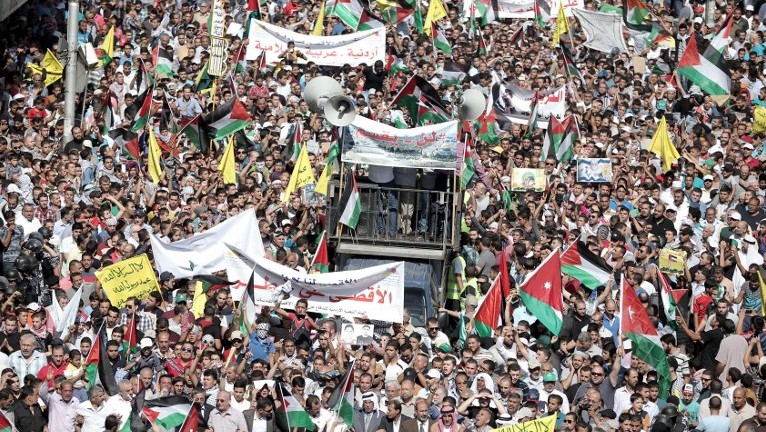 Thousands – 5,000 in Amman alone – take to the streets in pro-terror rallies.

Thousands of Jordanian citizens went out on Friday to city centers around the country, in mass protests demanding that the government cancel the 1994 peace agreement with Israel.

No less than 5,000 Jordanians took part in the main protest, which was held in the capital city of Amman, and which was organized by the Muslim Brotherhood.

The protesters shouted “no Zionist embassy on Jordanian land,” and, “with the knife and shards stab the son of the Jewess,” among other things.

A central part of the protests was the traditional burning of the Israeli flag, as protesters waved signs reading: “canceling the peace treaty is the answer,” and, “our land, our Jerusalem, and Allah is with us.”

Their words are more than just empty calls; Jordan’s King Abdullah II has stated during the recent upsurge in Arab terror that Israel’s defensive actions – and particularly its law enforcement on the Temple Mount that remains under de facto Jordanian Waqf rule and has been turned into a terror hotbed – are liable to impact the relations between Israel and Jordan.

Jordan has repeatedly threatened to revoke the peace treaty. In September it threatened to recall its ambassador over Israeli law enforcement against Arab violence at the Temple Mount – as it did from last November until February.

Last November, the Jordanian parliament held a special prayer session for the two Arab terrorists who committed a heinous attack on a Jerusalem synagogue, murdering four Jews at prayer and reportedly beheading two of them, as well as murdering a police officer.

Jordan was established by British fiat in 1946, as a kingdom for Abdullah I of Saudi Arabia. It is made up of a majority of Palestinian Arabs, while nearly all Arab residents of Judea and Samaria hold Jordanian citizenship, leading many to suggest creating a “Palestine” in Jordan.

That call was given even more credence in June, when Palestinian Authority (PA) Chairman Mahmoud Abbas called Jordanian and Palestinian Arabs “one people living in two states.”