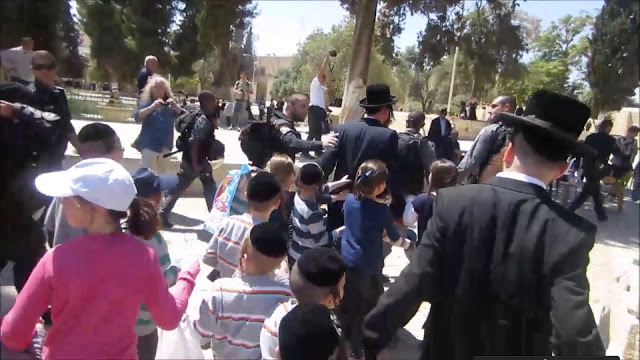 The Palestinian Ministry of Information, run by the [so-called] “moderates” of the Palestinian Authority [called “Fatah” which means “conquest”] under that man of peace Mahmoud Abbas, has denounced terrorism.

No, of course not. The terrorism that they condemn is of a more heinous variety altogether.

Jews walking around their most sacred spot.

The Ministry issued this press release on May 25:

The Ministry of Information considers the invitations of the so-called “Temple Mount” organizations to break into the Al-Aqsa Mosque yesterday and today, on the occasion of the so-called holiday of the revelation of the Torah, to be extremist government-sponsored terrorism.

The Ministry confirms that the occupation’s facilitating people to break into the holy mosque, and its protection of the extremists, and its attack on worshipers, and cracking down on freedom of prayer in it, reveals Israel’s true intentions to launch the terrorism of aggression all the way to seizing and establishing a “temple” in its place!

The Ministry calls on our people to decamp to the Al-Aqsa Mosque and defend it against what is being plotted against it. And it urges the ambassadors of countries of the world and members of diplomatic missions to carry out their responsibilities, and to intervene with their governments to force Israel to stop its terrorism against the Islamic and Christian holy sites before it is too late.

The Ministry says that the occupation is responsiblefor all the consequences of the intrusion, and exposure to the worshipers, and the threat to the first Islamic Qibla.

The Ministry of Information

Here are some of the terrorists, who presumably must be stopped by any means before they perform their next act of terror.

Which makes another question that reporters will never ask Mahmoud Abbas – “Do you really consider Jews walking around a holy site to be terrorists?”