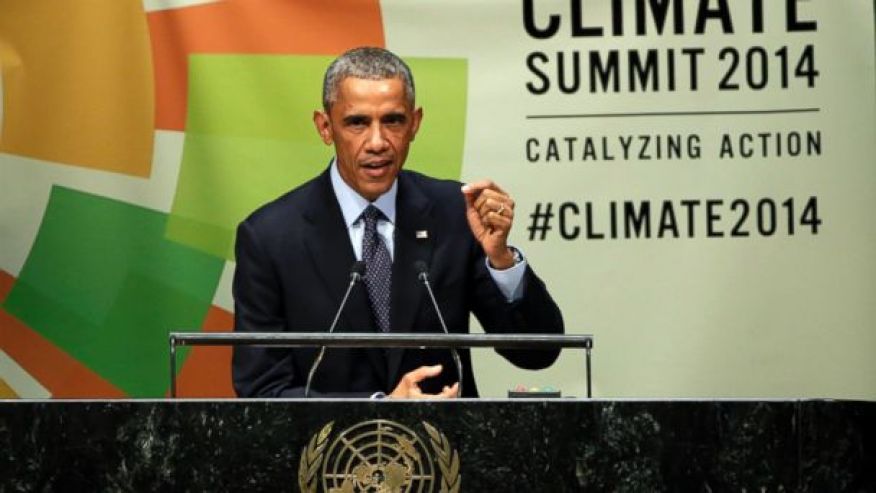 And slaps media for failing to counter with facts.

Joe Bastardi, former chief long range forecaster at Accuweather and master weather predictor for WeatherBell Analytics, blasted President Obama’s “absurd” claim that climate change is a factor for the rise in terrorism. He then turned his ire towards the media and implored them to do their job and counter these false claims.

In a series of messages posted to Twitter, Bastardi replaced the impassioned rhetoric, and media ignorance, with scientific weather maps and historical facts:

On Friday, Bastardi published an opinion piece to The Patriot Post continuing his fight against absurd claims, but this time set his sights on the Anthropogenic Global Warming alarmists that are driving the policies of the president. In his article “Disaster Du Jour,” Bastardi writes:

Sometimes I think the AGW crowd is like a swarm of locusts, moving from field to field. It’s actually a great strategy because there’s always going to be some location on earth [sic] where some kind of extreme is occurring — though, in most places, the weather is tranquil the majority of the time. If it wasn’t, there wouldn’t be so many people on the planet, which I suspect is another agenda that drives all this. Simply find a place where a rare event is occurring, then blast headlines that claim it’s because man is destroying the planet.

Bastardi takes on the California drought concern, reminding that it’s not only a natural occurrence, but is not helped by “atrocious planning” and federal guidelines that protect indigenous tiny three-inch long fish, the Delta smelt, rather than diverting lake water to residents.

The same concerns were broadcast just three years ago, Bastardi said, when Texas and the southern Great Plains were suffering from drought. Then, Bastardi and his colleagues predicted a reversal of the situation. Using current meteorological maps, his article shows that not only has it reversed, but it continues to do so. He writes:

But do you hear anyone who has turned the focus to the California drought pointing out that the hysteria in the southern Plains is reversing?

To be sure, the Pacific, which is going through a similar cycle as the 1950s when it suddenly cooled, then warmed for a couple of years, will cool again. And with so many more people living in the South and in California, this is an adaptation-to-nature problem, not a let’s-all-act-to-change-nature problem as it’s being advertised. But the media blindly follows the radical missive of the AGW agenda, so the disaster du jour rules the headlines.

Al Gore’s warning back in 1992 about a hole in the ozone was taken to task. With those warnings still alive and well, Bastardi reasons that if the ozone hole is opening up again, that means it must have closed at some point. He wondered why questions like this don’t appear from the media: “Well, why did it close up so it can open up again; isn’t that natural?” Same goes for drought and floods, he said.

To illustrate that such alarmism is nothing new, Bastardi uncovered an article from a 1953 Popular Mechanics Magazine that sounded eerily similar to what we hear today:

There’s little doubt about our changing climate. The fierce winters of yesterday are disappearing, tornadoes and hurricanes are becoming more vicious and weather trends aren’t “trends” any more. They can’t be depended upon. Just about anything can happen — and does.

Bastardi explains that this reaction was because of “a similar cyclical pattern in the 1950s” surrounding the drought in the southern Plains. Back then, Bastardi said, they were blaming the weather on the affects from the Atom Bomb: “Now they blame it on CO2. We know the former was wrong, and it’s very highly probable the latter is too. The common denominator in both is the cyclical nature of the climate, inherent in the design of the system.”

In a final note, Bastardi points to another accurate prediction from a former president who, concerned about the growth of the military-industrial complex, warned of the potential disaster “by task forces of scientists” whose costly research could end up driving federal policies. In Dwight Eisenhower’s own words, the mentality of today’s “disaster du jour” crowd is on full display:

“The prospect of domination of the nation’s scholars by Federal employment, project allocation, and the power of money is ever present and is gravely to be regarded. Yet in holding scientific discovery in respect, as we should, we must also be alert to the equal and opposite danger that public policy could itself become the captive of a scientific-technological elite.”