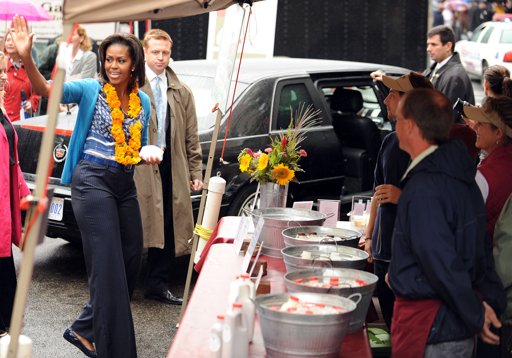 Michelle Obama said that living at the White House was like living in a cave.

Michelle Obama, along with daughters Sasha and Malia, are in Africa wasting taxpayer money to promote the First Lady’s Let Girls Learn initiative. By now, we are fairly used to Michelle taking lavish vacations and pointless goodwill trips that cost us hundreds of thousands and even millions of dollars, but this one is different. At a stop in Morocco, Michelle casually gave away $100 million, which we all worked hard to earn, so that girls in that country can go to school.

U.S. first lady Michelle Obama, her mother and daughters Sasha and Malia were joined by Meryl Streep in Morocco‘s Marrakesh on Tuesday on a six-day tour to try to promote girls’ education.

Oh good, we’re paying for Michelle’s mom and Meryl Streep too. This just keeps getting better.

“I am sitting here now as the U.S. first lady, talking to you, because of my education,” Michelle told a group of girls anticipating some US generosity.

No, she was sitting there talking to the girls because we paid for her to go over there. She was sitting there as First Lady of the United States because she married a bum that, despite his lack of qualifications, was elected president. Her education literally had nothing to do with it. Also, she’s selling those girls some snake oil by making it sound like an education is a golden ticket to the presidential palace or whatever the hell they have in Morocco.

Now here’s the part that should blow everyone away. Well, everyone with a job who pays taxes anyway:

The U.S. government’s Millennium Challenge Corporation (MCC) was launched during her visit and includes $100 million to be spent on 100,000 Moroccan students, half of whom will be teenage girls. The funds come from $450 million given by the MCC last year to boost education and employability in Morocco.

That’s kind of a weird way of saying it, but basically Michelle Obama gave Morocco $100 million to be spent on education and apparently there’s another $350 million on the way.

The Reuters reporter is trying to make it seem like that money is coming from the private sector, but nothing could be further from the truth. The Millennium Challenge Corporation was created by the federal government to distribute foreign aid. It is funded entirely with US taxpayer dollars. That’s your money and my money.

I am generally against the US giving foreign aide, but this one is especially hard to take. First, Morocco has a 99.9% Muslim majority. Second, this isn’t to help the country modernize, become democratic, or even to fight terrorism. All of this money is going to fund the pet project of Michelle Obama. Usually the First Lady’s hobby doesn’t end up costing Americans this kind of money.

Lets keep in mind that Michelle still has several more countries to visit on her African adventure. How much more of our money is she going to give to Muslim nations and third-world shitholes? FLOTUS has taken some pretty expensive trips, but this is by far the costliest.