Muhammed Ali was a Muslim that said G-d was against race-mixing; Trump calls him a “great champion” and “wonderful guy” 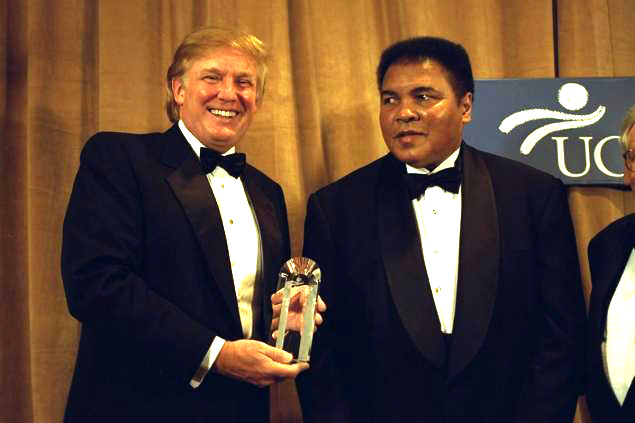 And it gets better…

Basically anytime something novel in the news happens, all we have to do is search for that item and Donald Trump in order to find something absurd and ridiculous. Today’s edition is the whiner-in-chief’s tweets about Muhammed Ali.

Here’s what the toupee-litarian tweeted upon reading at Alex Jones’ website that chemtrails has killed Muhammed Ali:

Muhammad Ali is dead at 74! A truly great champion and a wonderful guy. He will be missed by all!

Obama said in his speech that Muslims are our sports heroes. What sport is he talking about, and who? Is Obama profiling?

Remember this is the moron that legal aide and butt-kisser Mike Cohen loudly proclaimed had a “fantastic memory” who had never said anything inaccurate ever. And none of us doubt that, at all. Except Trump actually met Muhammed Ali, and tweeted that he didn’t know any Muslim athletes.

When Trump suggested that no such sports stars existed, critics swiftly pointed out that Ali, Kareem Abdul-Jabbar and Shaquille O’Neal, among others, are all proud Muslims.

Ali even took the chance to blast Trump’s proposal.

But early Saturday, as news of Ali’s death began to spread, Trump seemed to forget his December bluster. He praised the champion as if they were old pals.