“Murder or Get Out of Medicine!” 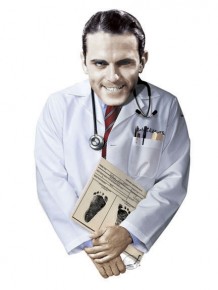 Medical martyrdom is coming, a term I coined to describe doctors, nurses, pharmacists, and other such professionals being forced (soon) to choose between their callings and participating in the intentional taking of human life.

That is already the law of Victoria, Australia, where doctors must perform abortions when asked or refer to a colleague they know will do the deed. Some doctors I met there moved across the country to escape the Draconian diktat.

Canada’s Supreme Court recently imposed euthanasia across the country, including for “psychological pain” caused by a diagnosable medical condition. The question now posed is whether doctors will be able to opt out.

So far, it doesn’t look good. The Canadian Medical Association–already weak-kneed on assisted suicide/euthanasia–wants doctors protected. But the Ontario and Saskatchewan Colleges of Doctors and Surgeons want doctors forced, as in Victoria, to do the deed, refer, or if no references are available, forced to kill.

The very idea that we ought to countenance conscientious objection in any profession is objectionable.

Nobody forces anyone to become a professional. It is a voluntary choice. A conscientious objector in medicine is not dissimilar to a taxi driver who joins a taxi company that runs a fleet of mostly combustion engine cars and who objects on grounds of conscience to drive those cars due to environmental concerns. Why did she become a taxi driver in the first place? Perhaps she should have opened a bicycle taxi company instead.

The very idea that Schuklenk compares driving a taxi to practicing a medical profession, and worries about pollution to the active and intentional taking of human life tells you so much about what has gone wrong in bioethics.

Moreover, when today’s doctors and nurses entered the profession, they weren’t required to kill.

So, this is where we are heading fast: Kill or get out of medicine! More, don’t get into medicine in the first place if you are an orthodox religious believer or philosophically opposed to abortion and euthanasia. You have no place in the medical arts.

It is worth nothing that Schuklenk supports Futile Care Theory.  Thus, his anti-medical conscience attitude doesn’t extend to the ICU when patients want life-sustaining treatment the doctor thinks is “inappropriate.” Then, doctors should have a right to say no–even though the most fundamental job of doctors is to keep patients alive when that is what they want.

He also advocates infanticide in some cases.

Can we say, “culture of death?”

When Dutch doctors were ordered by the Nazi occupiers to practice (then) German-style death medicine, they took down their shingles en masse, and won the victory.  Will Canadian physicians have similar guts in a society in which dissenters are not murdered?