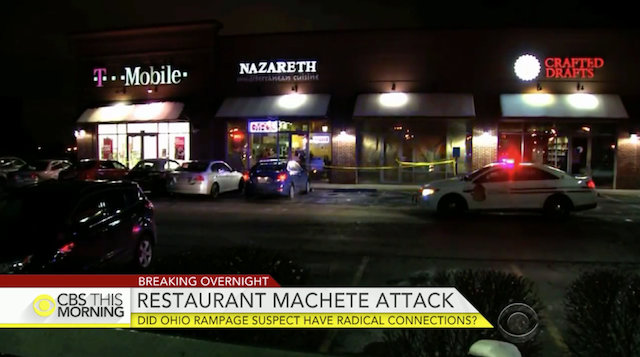 The media is covering it up and calling it a “lone wolf” attack.

In Columbus, Ohio, a Muslim man armed with a machete was shot and killed by police after attacking restaurant patrons with a machete. Four patrons were injured, and one is reportedly in critical condition. At this time, there is no liberal pushback demanding machete-control.

The FBI tells Fox News that they are investigating the possibility that the Thursday night attack on the Nazareth restaurant was terror-related. According to CBS News, attacker Mohammad Barry has “a Somali background”, traveled to the Middle East as recently as 2012, and is a Muslim.

Here is more from Fox News:

The attack occurred at Nazareth Restaurant and Deli, a Mediterranean eatery, in Columbus. Police said the unidentified man walked into the restaurant, had a conversation with an employee and left.

About a half hour later, the suspected attacker returned, approached a man and a woman at a table near the doorway and started his rampage.

“He came in and started beating up on another man, I thought it was a personal thing. Then he just started down the row hitting everybody; people were bleeding,” Karen Bass, a restaurant patron, told My Fox 28 Columbus.

The owner of the restaurant, Hany Baransi, has been in the United States for over thirty years, but was previously an Israeli citizen. The establishment is known for its “multiculturalism,” according to Baransi, who was not there at the time of the attack.

Mohammad Barry apparently also asked where the owner was from, and after finding out he was from Israel, left and then came back and began the attack. Police are also looking into reports that Barry may have been on the terror watch list.

Machete attacks on Israeli citizens have become all too common, though usually they take place in Israel. This is a Middle East headline, right here in the heartland of the United States.