Muslims Just Beheaded 2 Toddlers, What They Were ‘Guilty’ Of Is Unfathomable 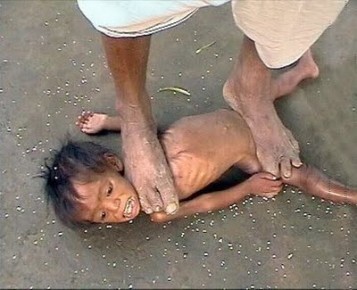 It seems that every time we hear about Muslims committing depraved and debauched acts on innocent children, we think to ourselves that it can’t possibly get any worse. However, witnesses have come forward to reveal that devout Islamists savagely beheaded a pair of “guilty” 2-year-old and 4-year-old toddlers, and the reason behind their execution is no less disturbing.

According to witnesses who are secretly passing on information to the press in the Islamic State stronghold of Mosul, Muslim members of the terrorist organization are reporting that they’ve seen the end-all of unspeakable crimes against humanity committed by the rising Caliphate.

Sources told the National Iraqi News Agency that Islamists within the group inflicted their most heinous punishment on two innocent children last week. The witnesses, who remain unnamed out for their own protection, were horrified when [Islamic State terrorists] brutally executed two toddlers in the public square.

“Daesh arrested the two families near Hadher and sentenced them to death by beheading, which included four women and two children aged four and two years old,” the sources said.

The witnesses explained that the execution was unlike any other they’d seen, still reeling from the bloody spectacle. However, the only reason these two babies were brutally beheaded is because their terrified parents attempted to flee the city with them.

“The terrorist organization Daesh executed two families consisting of 17 civilians Saturday morning, including four women and two children after being arrested during an attempt to escape Mosul on their way to Baghdad.”

The horrific news arrives on the heel of a report that ISIS also murdered three other children, aged 8-10, just south of Mosul recently, Speisa reports. According to sources, they were put to death “because of insulting Daesh in one of the streets.”

These revelations coincide with a 2014 shock report, in which witnesses confirmed that ISIS is “systematically beheading children” in Iraq.

“They are systematically beheading children,” Arabo confirmed, “and mothers and fathers. The world hasn’t seen an evil like this for generations.”

“There’s actually a park in Mosul where they actually beheaded children and put their heads on a stick… this is crimes against humanity. They are doing the most horrendous, the most heart-breaking crimes that you can think of.”

As these atrocities go unchallenged, the liberal left and its Muslim apologists have nothing but excuses, seeking only to defend Islam’s historically sordid reputation. However, its own religious texts prove just how inherent this particular violence is.

Islamic hadith confirms by Muhammad’s own account that beheading children is perfectly acceptable, as long as they had begun to grow pubic hair — and who better to lead by example than their most revered prophet? Because Islam’s “perfect man” modeled this sadistic behavior, we cannot ever expect to use Islamic ideology to reason with [so-called] “moderate” Muslims or motivate them to stand against it. That would literally be denouncing Muhammad’s own actions to condemn nearly anything ISIS does. The only way to fight the logic behind this inhumanity is to fight its core, which is why standing against Islam is our only defense.