Islamic Jew-hatred, it’s in the Qur’an. 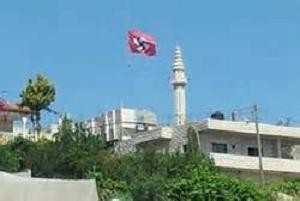 When I ran ads highlighting the relationship and cooperation between the the Third Reich and the Muslim world, Western media and cultural elites widely condemned and vilified me.  When Muslim annihilationists (under the cynically named “Palestinian” movement) proudly display their Nazi sympathies, all is quiet on the Western front.

Israel should have blown up that flagstaff and minaret.

“Nazi flag flies high over West Bank mosque (VIDEO), The Washington Examiner, May 20, 2015 (thanks to Christian):

Keeping alive the long history between National Socialism and Jihaddist Islam, the twisted cross of Naziism is flying high and proud over a heavily Arab-Muslim town south of Jerusalem today, as reported by the Israel National News Service via Google News on May 20, 2013.

In the West Bank town of Beit Omar, an over-sized red, white and black swastika-emblazoned flag of the Third Reich was reportedly clearly visible to Israeli residents living in the southern outskirts and suburbs of Jerusalem, especially the Jewish town of Gush Etzion.

According to an enraged Gush Etzion resident Uri Arnon:

I felt we were going back 75 years, losing our hold on the land.

The Arabs no longer feel the need to hide their murderous tendencies, announcing out loud that they wish to annihilate us.

The Israeli Defense Force (Israeli Army) was notified, but reportedly hasn’t removed the symbol of hate due to it being affixed to a live electrical line.

Not exactly their first experience Islam has had with the Master Race.

During the Second World War, the Grand Mufti of Jerusalem Haji Amin al-Husaini threw his considerable support behind Herr Hitler, and was even an honored guest on Berlin.

Al-Husaini was also instrumental in forming the all-Muslim SS Hansar Division who were reportedly very enthusiastic fighters for the cause of Nazism.

It’s certainly not the first time Jew-hating [so-called] “Palestinian” Muslims have raised the Nazi flag. Below, a Nazi flag bearing a large black swastika was seen waving above the Palestinian village of Beit Ummar. 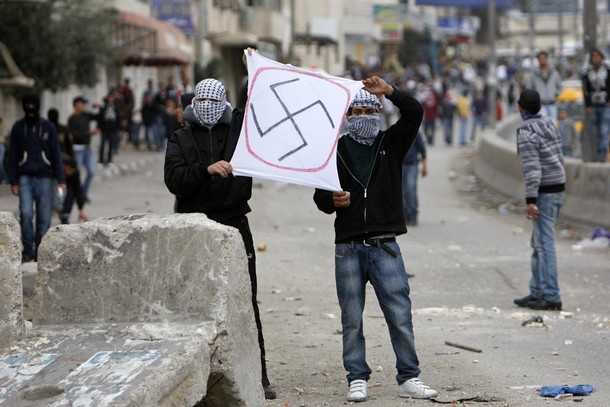