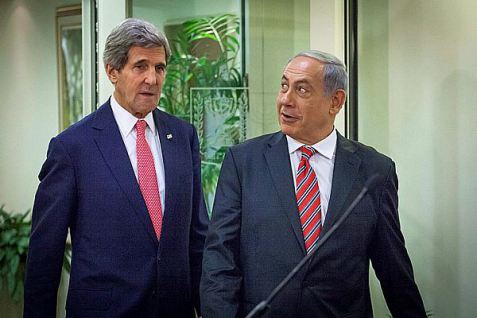 Netanyahu cares more about what Barack Hussein Obama, John Kerry, and France (who can’t even protect it’s own people from jihad) think of him than the brutal murder of his own people.

Shame on Netanyahu! There is no peace from a violent enemy that calls for your extermination. Are you going to try and give up part of Israel to reward violent Muslim terrorists? What happened to “never again”?

Israeli PM Netanyahu is to meet US Secy of State Kerry to discuss — again — the issue of “peace” talks with [terrorist] Abu Mazen.

Prime Minister Benjamin Netanyahu is slated to meet in Rome with U.S. Secretary of State John Kerry early next week, reportedly to discuss the possibility of resurrecting the moribund ‘final status talks’ with the PLO.

International pressure on Israel to resume negotiations with the Ramallah [so-called] government has been growing since French President Francois Hollande launched his ‘Paris initiative’ earlier this year. Under that plan, France would host the leaders of Israel and the PLO for talks later this year.

Negotiations which had been limping for years collapsed in April 2014, at around the same time PLO leader Mahmoud Abbas announced his intention to seek a unity government with the Hamas terrorist organization in Gaza.