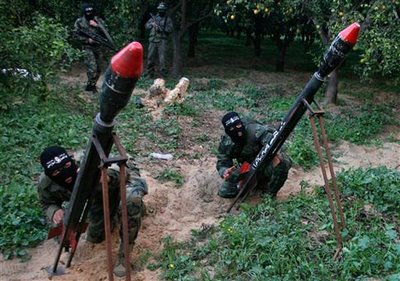 As happens after every Gaza war, Amnesty International released a single report about Hamas among its multiple anti-Israel reports to maintain the pretense of objectivity.

But even in this report, which admits that Hamas engaged in war crimes for firing rockets both at Israel and at its own citizens, proves its anti-Israel – and pro-Hamas – bias.

Even though the report unquestioningly states that Hamas shooting indiscriminate rockets at civilian areas are war crimes, it also accuses Israel of war crimes multiple times.

It has an entire section blaming Israel for not adequately providing shelters for hundreds of illegal Bedouin communities in the Negev. As the press release states:

The briefing also highlights the Israeli authorities’ failure to adequately protect civilians in vulnerable communities during the conflict, particularly Bedouin villages in Israel’s Negev/Naqab region, many of which are not officially recognized by the Israeli government. Ouda Jumi’an al-Waj was killed by a rocket that struck the Bedouin village of Qasr al-Sir near the Israeli city of Dimona on 19 July.

Most Bedouin villages are classified as non-residential “open areas” by the Israeli authorities, so the Iron Dome system to intercept rockets does not operate there and there are no bomb shelters. More than 100,000 people live in Bedouin villages in southern Israel.

“Civilians living in Bedouin villages during the conflict were left vulnerable and exposed, one manifestation of the discrimination they face on a daily basis. The Israeli authorities must ensure everyone is given equal protection,” said Philip Luther.

Iron Dome does not protect tiny villages, Arab or Jewish. The priority of providing bomb shelters for the illegal villages has been debated in Israeli courts considering that there are not unlimited resources available. If there were unlimited resources, of course shelters should be provided to every citizen, but to blame Israel for not protecting residents who purposefully set up illegal communities would be like blaming New York for not providing “Occupy Wall Street” protesters with adequate water and electricity.

Then the report goes on to slam Israel’s Prawer plan that would allow the Bedouin to live in recognized communities with adequate infrastructure, schools and of course bomb shelters. The plan was halted a while ago. Even though there is no relevance of that to the Amnesty report, Amnesty cannot resist condemning Israel.

For example, it is highly biased in terms of which statistics it chooses to use:

According to UN data, [so-called] Palestinian armed groups fired 4,881 rockets and 1,753 mortars towards Israel between 8 July and 26 August 2014. 20 At least 243 of these projectiles were intercepted by Israel’s Iron Dome missile defence system, while at least 31 fell short and landed within the Gaza Strip.

It doesn’t bother to quote Israeli sources which would be in a position far better than the UN to count both rockets intercepted by Iron Dome and, becaue Iron Dome keeps track of every Gaza rocket launch, they would know how many rockets fell short in Gaza.

In fact, there were over 250 documented cases of Hamas rockets falling short in Gaza, causing unknown amounts of damage, injury and death. Amnesty, which is aware of the figure (since it references Israel’s report on Hamas war crimes in other places) cannot be bothered to accurately state the amount of harm Hamas did to its own residents.

In another case, Amnesty claims that Hamas cannot be accused of using human shields, by making up its own unique definition of human shields:

Several of these actions which have been discussed above, such as storing munitions in civilian buildings or launching attacks from the vicinity of civilian buildings, violate the obligation to take all feasible precautions to protect civilians from the effects of attacks. But they do not necessarily amount to the specific violation of using “human shields” under international humanitarian law, which entails “using the presence (or movements) of civilians or other protected persons to render certain points or areas (or military forces) immune from military operations.” The practices most commonly condemned as such have involved actually moving civilians to military objectives in order to shield those objectives from attack. According to the International Committee of the Red Cross (ICRC), “the use of human shields requires an intentional co-location of military objectives and civilians or persons hors de combat with the specific intent of trying to prevent the targeting of those military objectives.”

Amnesty International has not been able to verify specific statements which the Israeli authorities have cited as made by Hamas officials during the hostilities encouraging civilians in Gaza to ignore IDF warnings to evacuate.128 However, the reported statements were directed to civilians in general or in large geographic areas; for example, Ministry of Interior spokesperson Iyad al-Buzm’s call on people “in all parts of the Strip to ignore the warnings… as these are part of a psychological warfare”. Public statements referring to entire areas do not amount to directing specific civilians to remain in their homes in order to render fighters, munitions or military equipment in specific locations immune from Israeli attacks. Thus, while potentially of concern, such statements would not constitute the use of “human shields”.

Moreover, there were other more specific reports of human shielding that Amnesty ignored. There were reports of Hamas actually firing at civilians who tried to leave their homes. There were multiple documented cases of terrorists working from within the houses of Gaza families making them all human shields. And IDF soldiers witnessed specific cases of Hamas terrorists literally dragging children with them in battle.

Furthermore, there are many,many Hamas war crimes that Amnesty is ignoring. As with HRW, they seize on Hamas rockets and don’t bother to check the other war crimes and violations of international law by Hamas.

This report is simply an attempt by Amnesty to shield themselves from accusations of anti-Israel bias. And even so, given the known facts about the war, this report is highly biased against Israel – and for Hamas.