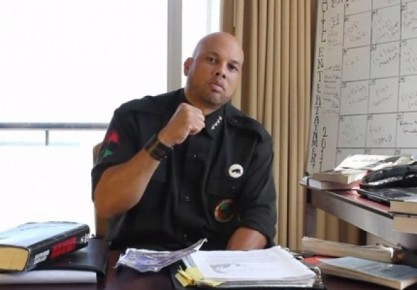 When last we left our good friends of the New Black Panther Party, they were in Ferguson, MO attempting to kill the prosecutor in the Michael Brown case and trying to blow up the Gateway Arch.

The FBI stopped those plots in their tracks, and the NBPP disappeared from the media for a few months.

You just knew they couldn’t keep their mouths shut about the Freddie Gray matter. And in typical Black Panther fashion, they are threatening to kill people in the “war” against blacks.

The leader of the New Black Panther Party says the United States has declared war against the nation’s black population — and that, like American revolutionaries, they are willing to kill if that’s what it takes to achieve justice in the aftermath of Freddie Gray‘s death.

Hashim Nzinga, the national chairman of the black rights organization, made the remarks this week on Black Power Radio — in response to the nationwide outrage over Gray’s mysterious death, Breitbart reportedThursday.

Nzinga said that the United States has effectively declared war on black Americans by sending “military police in the black neighborhood” to protect the wealthy — so they are well within their rights to fight for justice.

“We have to love ourselves enough to be willing to die or kill to save our babies and to save a black nation that is dying before our eyes,” he said.

“We pay taxes. They have declared war on us and it’s nothing but state racism,” Nzinga added. “America is about protecting the rich and the powerful.”

The party’s leader went on to liken his movement to the American Revolution, when patriots fought to free the nation from British rule behind leaders like George Washington.

Talk about delusions of grandeur…

There is every reason to believe this guy is serious. So far, we’ve been lucky in preventing their plots to kill people from coming to fruition. But that kind of rhetoric incites his followers to carry out his wishes. It only takes one or two followers of the NBPP to take Nzinga’s words to heart for a tragedy to occur.

Note that Nzinga does not specifically call for violence. He’s clever that way, as most radicals know the law well enough to avoid charges that they are inciting violence. But his followers know exactly what he’s calling for, which makes him an extremely dangerous man.