New ISIS VIDEO in Hebrew: “Not One Jew Will Be Left …..” Threatens to kill Jews Across the World 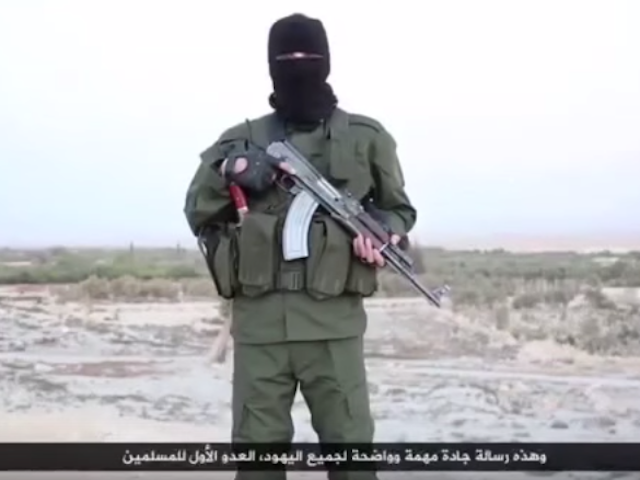 This is Obama’s legacy.

The Islamic State has declared war on the Jewish people, a Muslim from the jihadi group declared in fluent Hebrew, in a new video released by the devout Muslim army.

The threatening message, which appeared on social media Friday morning, was titled, “A message to the Jews, the first enemy of the Muslims.”

“This is a message to all the Jews, who are the Muslims’ number one enemy,” the masked jihadi says, wearing combat fatigues and holding an automatic weapon.

“The real war has not begun and everything you have experienced so far has been child’s play — nothing compared to what will happen to you soon enough, inshallah [God willing],” he added, according to a translation by the Times of Israel.

He continues, threatening the Jewish people with extermination: “We promise you that soon, not one Jew will be left in Jerusalem or across Israel and we will continue until we eradicate this disease from the world.”

This worrying video shows an ISIS militant threatening to kill Jews across the world.

The terror group posted the clip on YouTube showing a militant dressed in army fatigues wearing a balaclava.

It comes after a number of attacks in Jerusalem by Palestinians.

He says: “We assure you that soon there will not be a single Jew left on Jerusalem and throughout the country.”

He added the terror group would “move to eradicate the disease….. worldwide”.

The militant backs the attacks in Jerusalem, saying: “soon there will not be one Jew left in Jerusalem.”

It comes after reports that around 30 British-born Islamic State (ISIS) fighters have reportedly returned home to wage war on the UK.

More than 300 ISIS terrorists are believed to have returned to their homeland.

And the paper reports that one in 10 of the combatants could plot terror attacks – as lone wolves.

Will McCants, author of The ISIS apocalypse: The History, Strategy, and Doomsday Vision of the Islamic State , was quoted as saying: “One study done of foreign fighters says nine out of ten of those who do return don’t engage in any more mischief.

“That still leaves you 10 per cent to worry about.”

“And trying to keep tabs on which of the 300 is ready to strike could leave us vulnerable elsewhere.”