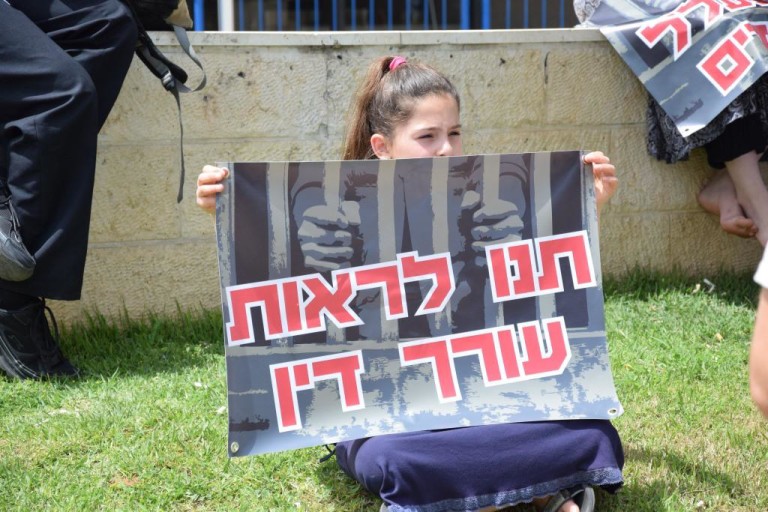 Five Jews are now in custody and banned from meeting with lawyers. The names of two of them were released for publication and the suspicions relate to damage of Arab property.

On the morning of Monday April 11th, the three Jews in custody on previously unspecified charges were brought to a hearing in Petach Tikvah. Dozens of supporters rallied outside the courthouse and derailed the use of an order banning the young Jews from meeting with their lawyers. The protestors held signs saying “Stop harassing Jews,” “Let them see a lawyer,” and “Stop harming our children.”

In addition, early in the morning on the day of the hearing two additional Jewish youths were arrested in connection to the saga. The Shabak often makes additional arrests on the day of a hearing when the investigation is going nowhere. This is done in order to trick the judge into believing that progress is being made since new suspects were arrested.

The judge in the case, Eliana Danieli, partially lifted the gag order on the case and permitted the details of the suspicions and names of the adult suspects released. Shneur Dana, who is married, was arrested on Tuesday April 5th and is suspected of torching an Arab vehicle. The specific charges are “connection to a felony crime” and “membership in an illegal organization. His detention was lengthened for two more days.

Pinchas Shandorfi, Dana’s brother-in-law was also detained on Tuesday April 5th. He is suspected of involvement in unspecified “security crimes” and his detention was extended for seven days. Another adult suspect is a soldier whose name is still under gag order and whose hearings are taking place in an army court.

In addition, there are two minors aged 16 and 17 who are suspected of “security crimes” against Arabs.

Despite the fact that the phrase “security crimes” was used in reference to the suspects, elements close to the investigation noted that the suspicions involve property damage and not harm to individuals.

The head of Honenu, Shmuel Meidad (Zangi) said after the hearing, “Sadly today it is enough to mention ‘security crimes’ and basic civil rights are taken away. These include the right to see a lawyer and at times the use of torture methods that are legal only in the case of ticking-time bombs. I fear for the safety of the arrestees and what the Shabak is doing to them.”

Rabbi Y., the father of several of the suspects gave an interview with Hakol Hayehudi and harshly criticized the police and Shabak. He noted that “Jewish settlers have less rights than ‘Palestinian Arabs.’ The Arabs receive lawyers and have no gag orders on their cases even when there are much more serious suspicions against them including harm to life.”

He called on the public to protest and cry out against the use of torture methods by the police and Shabak. He added that after the insufficient outcry during the torture of the Duma suspects, the “Shabak has moved one step further and is now torturing Jews over suspicions of damaging property.” The interview in full with English subtitles is posted above.

In support of Rabbi Y. and the families of the suspects, several Rabbis and public figures from Binyamin issued a call on the public to protest against the torture and arrests.