An new analysis finds 17% of Americans will have only one health insurer offering them plans on the Obamacare exchange next year. The analysis was performed for the NY Times by the McKinsey Center for U.S. Health System Reform. The NY Times reports:

So much for choice. In many parts of the country, Obamacare customers will be down to one insurer when they go to sign up for coverage next year on the public exchanges.

A central tenet of the federal health law was to offer a range of affordable health plans through competition among private insurers. But a wave of insurer failures and the recent decision by several of the largest companies, including Aetna, to exit markets are leaving large portions of the country with functional monopolies for next year.

According to an analysis done for The Upshot by the McKinsey Center for U.S. Health System Reform, 17 percent of Americans eligible for an Affordable Care Act plan may have only one insurer to choose next year. The analysis shows that there are five entire states currently set to have one insurer, although our map also includes two more states because the plans for more carriers are not final. By comparison, only 2 percent of eligible customers last year had only one choice.

There is a caveat here. Decisions about which companies will be offering plans in which markets can still change up until next month when insurers sign final contracts with the government. That means some insurers could still jump in to some markets, making the picture looks slightly better, or some insurers could decide to back out, making it look slightly worse.

Here’s the map prepared by the NY Times based on the McKinsey Center data. 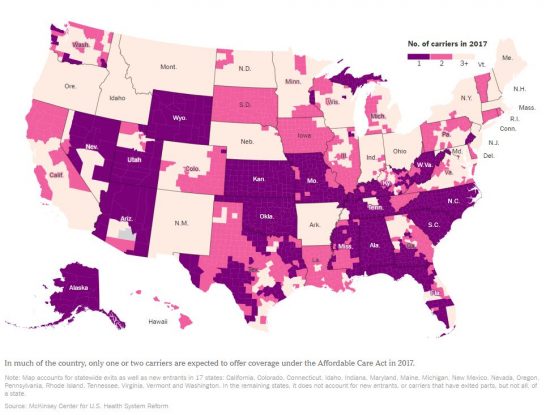