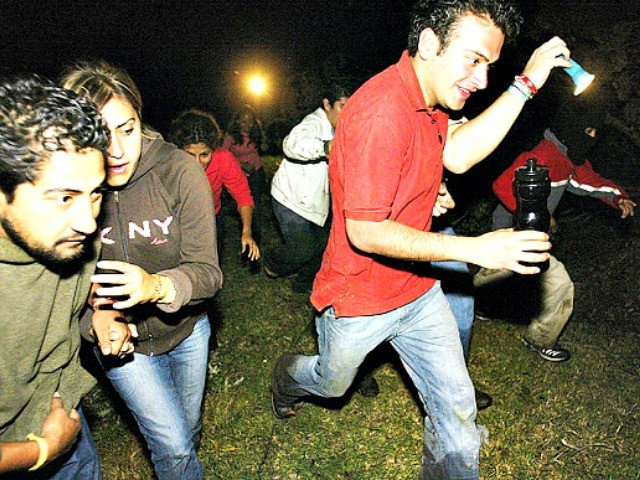 Illegal immigration may be a big issue at the U.S.-Mexico border, but in one Mexican town it counts as a theme park attraction.

The U.K. Telegraph reports that a theme park in El Alberto, Mexico has been selling tickets for tourists to pretend they are illegal immigrants crossing the border into the U.S.— for over a decade.

The park is called EcoAlerto.

At EcoAlerto, those wishing to play as faux illegal immigrants pay 250 pesos to experience a simulated border crossing —“wading through mud, tunnels and across rough terrain without torches or water while trying to evade border guards, thieves and dangerous drug traffickers, all played by actors,” the Telegraph reports.

According to the Telegraph, the park’s organizers say the goal is to raise awareness about the dangers of illegal immigration.

“We started doing these walks on 31 July, 2004, with the aim of showing people the real Mexico that many people don’t want to see,” the Telegraph quotes an alleged “coyote” named “Poncho.”

The EcoAlberto website features more explanation about the “caminata nocturna” or “night walk.” A translation of site explains:

The Alberto was until recently a remote forgotten community of literacy, why over 70% of the community emigrated to the United States for a better future. The Night Walk concept was created with the aim of raising awareness in our young countrymen community, showing them not to attempt risking their lives looking for ‘a better life in another country’ (live the famous American Dream), projecting a vision and a motivation to look for new production projects.

According to the description, the journey starts at the town’s Catholic church, where participants are offered a “motivational talk, emphasizing that it is not a training activity, and has the inner purpose of creating awareness and a source of employment for our people.”

“During the tour the values of unity, solidarity and reaffirming confidence to believe in themselves and break any shortcut that can obstruct us in the race of life to achieve some purpose or goal pending in the life of each participant is encouraged,” it adds.