Nobody is born gay

If the supposed “homosexual gene” is really passed down [from evolution], then how does that work when all homosexuals are born from non-homosexual reproduction between a male and female? Only normal reproduction creates children. 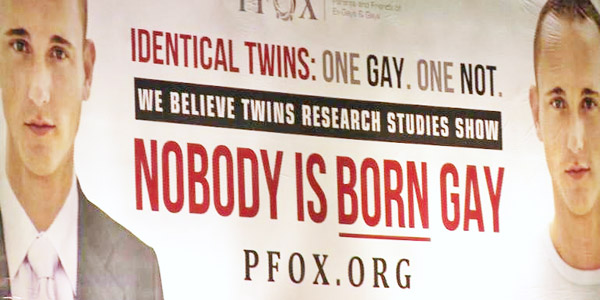 An organization supporting what has been called the least protected of all minority groups has thrown down the gauntlet in a major social war with a billboard that boldly challenges the claim that a person has no control over their sexual orientation.

The billboard, which is prominently displayed on Virginia’s I-95 near one of the country’s largest “gay” communities, features a pair of identical twins and says, “Nobody is born gay.”

It’s sponsored by Parents and Friends of ex-Gays.

The ad challenges the claim of a so-called “gay” gene that supporters say shows that homosexuality is genetic.

The ad features what appears to be a pair of identical twins, with the description: “Identical twins: One gay, one not.” It then goes on to say “Nobody is born gay.”

The basis for PFOX’s claim is several studies including one by Dr. Michael Bailey, a professor in the Department of Psychology at Northwestern University in Evanston who conducted studies on “gay” twins.

Bailey discovered that in only 52 percent of the cases of an identical twin who was “gay” was the other twin “gay.”

The figure was 22 percent for fraternal twins.

Bailey admitted that the study shows that since the number was not 100 percent for identical twins, homosexuality is not completely genetic.

In an interview with WTVR-TV out of Richmond, Bailey said those who posted the billboard have a valid point.

“In my opinion there’s room for both forces,” Bailey said. “One, if you want to believe that you’re gay and born that way, all right. But if you believe that there’s a causation there, there’s something that can be changed, that … deserves a voice as well.”

The billboard has gotten the negative attention of activist groups who have said the message on the billboard amounts to hate speech. And the issue is important because for years homosexuals have been casting themselves as a minority in need of special protection. The proposition that sexual orientation is changeable destroys the reason for that minority and protected status, as it becomes nothing more than a lifestyle choice then.

“I am shocked and really disappointed that at the end of 2014, we have a billboard in the middle of our city that says that kind of hate,” Beth Panilaitis, executive director of Rosby, a group that works with “gay” youth, told WVUE-TV.

However, Greg Quinlan, a lobbyist for the New Jersey Family Policy Council and the former president of PFOX, told WND the billboard’s message is dead on.

“The billboard speaks to the scientific fact that to quote the American Psychiatric Association, ‘there still remains no replicated scientific studies supporting any specific biological etiology for homosexuality,’” Quinlan told WND. “There is zero evidence that a person is born a homosexual. In fact, Dr. Francis Collins of the human genome project with the National Institute of Health, who was appointed by President Clinton to do the project said homosexuality was “not hard-wired.’”

Ironically, those who oppose the message and mission of PFOX claim that Quinlan does not exist. A key mantra of those who oppose any attempt to assist a person in leaving homosexuality is that there is no such thing as ex-gays.

Tim Rymel, a homosexual who once said he was a former homosexual, told Think Progress, a left-wing advocacy group, “There is no such thing as ex-gay. We’ve never changed anybody’s sexual orientation. It’s never been documented anywhere.”

However, there is no doubt that Quinlan does exist. To those who claim people like him were never really homosexuals to begin with, he says he was heavily involved in the “gay” lifestyle.

Quinlan said he first became involved in homosexuality at the age of 10 with a 13-year-old boy while they were looking at pornography. Despite growing up in church, Quinlan said his father showed him no affection, and after the first sexual encounter he received acceptance, approval and affirmation, something he never received at home, which made him come back for more.

When asked about Christian leaders who are calling for churches to be accepting of the homosexual lifestyle and begin to support same-sex marriage, Quinlan says the challenges Christians are facing today are not different than those faced by the early Christians.

“The reason we see so much of a proliferation of homosexuality in our society now is because we live in a sex-saturated culture,” Quinlan explained.