NYPD Cop Shot in the Face in Critical, Stable Condition 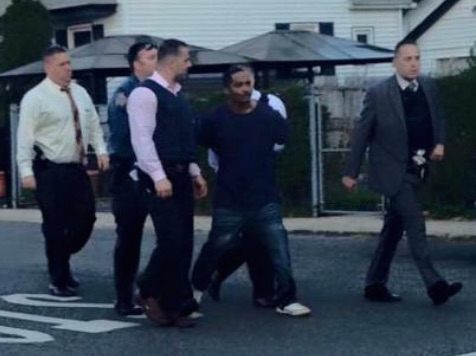 “this was an unconscionable act of violence … against the values we hold dear” — @BilldeBlasio re: shooting of #NYPD officer

UPDATE, 11:00 PM: We present the latest update without comment.

“The pants were too low, he couldn’t run with them,” said the father, who has lived at the house 10 years. “He was walking fast, he was pushing the gun down into his pants.”

UPDATE, 10:34 PM: The suspect served a jail sentence for attempted murder, according to the New York Daily News — and was released after seven years, only to shoot a cop seven years later.

Blackwell served seven years in prison on attempted murder charges. He was released from the Clinton Correctional Facility in upstate Dannemora in June 2008.

Blackwell was wanted for committing an unknown crime in November 2014. No other details were immediately available.

UPDATE, 10:29 PM: Time Warner Cable NY1 reports that the suspect opened fire when police approached him on suspicion of possessing a gun:

A man has been arrested in connection with a shooting of an NYPD officer in Queens Saturday afternoon.

Police say the shooting happened near the intersection of 104 Road and 212 Street in the Queens Village neighborhood around 6:15 p.m. Saturday.

Investigators say plainclothes anticrime officers noticed a man with a bend in his waistband, indicating that he may possibly have a handgun on him. When they approached him, police say the suspect opened fire and at least two bullets hit an unmarked vehicle.

One of the officers suffered injuries to his right cheek and back of the head. He was taken to Jamaica Hospital Medical Center in critical but stable condition.

UPDATE, 10:22 PM: Mayor de Blasio has yet to make an appearance.

Mayor @BilldeBlasio half an hour late for his own newser #abc7ny pic.twitter.com/jpDXAEI7ks

UPDATE, 9:59 PM: CNN covers Baltimore riots; one popular headline reads, “Look at trees in a different way.” The officer’s shooting is buried beneath a sob-story on Muslim terrorist Dzhokhar Tsarnaev. “It’s like he isn’t there,” breathes the female reporter in the courtroom.

UPDATE, 9:44 PM: Sources tell the New York Post that the suspect allegedly had ten prior arrests:

His name was not immediately released. But law enforcement sources told The Post that he has a police record of ten arrests including robbery, grand larceny and criminal possession of a weapon.

UPDATE, 9:22 PM: Both Commissioner Bill Bratton and Mayor Bill de Blasio are expected to address the shooting in a press conference.

UPDATE, 9:17 PM: The New York Daily News reports that the officer’s injuries are not life-threatening. Sources tell the paper that “the suspect in custody was identified as Demetrius Blackwell.”

UPDATE, 8:48 PM: The New York Post reports that the search for the suspect — or suspects — has expanded:

An NYPD cop was shot in the head and chest and critically wounded in Queens on Saturday.

The anti-crime officer worked out of the 105th Precinct in Queens Village and was on duty when he was hit at around 6:15 p.m. It was not clear whether he was in uniform – anti-crime officers often do plainclothes patrols.

A suspect was initially believed to be holed up in a nearby building at 212th Street and 104th Avenue. Police sent hostage negotiaters to try to talk him out – only to discover it was a false tip. The search has now expanded.

The cop, described as a four-year veteran who is not married, was rushed to Jamaica Hospital in a radio car. He was responding to a report of a person with a gun.

“It doesn’t look good,” one cop was overheard telling another in the emergency room where many cops gathered, awaiting news as the injured officer underwent surgery.

UPDATE, 8:42 PM: The New York Daily News has updated its coverage to note that the officer was shot in the face:

A plainclothes NYPD cop was shot in the cheek in Queens Saturday — and a massive manhunt was underway for the gunman, sources told the Daily News.

The unidentified cop was among a team of anti-crime officers conducting a car stop on the corner of 212th St. and 104th Road in Queens Village about 6:15 p.m when the suspect fired three rounds, sources said.

The officer — who joined the force in 2010 — was rushed to Jamaica Hospital in a patrol car.

He was listed in critical but stable condition. A high-ranking police source said his injuries were not life-threatening.

Officers sealed off exits to the Belt Parkway in the hope of containing the shooter, sources said.

“They believe he may have gotten in a car,” a source said. “Everyone’s on the alert for this guy.”

One person was in custody Saturday night, sources said — but it wasn’t clear if it was the shooter.

One area resident said police officers were swarming the neighborhood by 6:30 p.m…

A man who lives one block from the scene said he was outside when he heard the crack of gunfire.

“We were standing right on our lawn and we heard two shots,” the man said, declining to give his name.

The shooting marks the fifth NYPD officer gunned down since December.

Perpetrators are barricaded. Male black and female black. Police officer is likely to die, and is from 105th precinct and was shot in Queens at 104 and 212th St.

Other law enforcement officers reportedly saw a shady car pull up next to the vehicle. A suspect fired rounds from the car, striking the officer.

UPDATE, 8:19 PM: A suspect has reportedly been taken into custody.

Multiple reports now via text that shooter is in custody.

UPDATE, 8:12 PM: Former NYPD officer John Cardillo is livetweeting information from sources. A perimeter has been set up.

Now getting that perps located, perimeter being set up to contain and move in. God I hope #NYPD ESU lights them the f’k up. Savages.

UPDATE. Cop is alive. In surgery. Just confirmed that with a personal friend of his.

Being told from cops on scene that MOS was sitting in his patrol car engaging a group in conversation when one pulled a gun and shot.

I grew up in the 105 pct where the cop was shot. The location of the shooting is close to Hollis. Rough area even back then. Getting worse.

Getting that shot #NYPD MOS is “likely.” Meaning likely to die. I’m infuriated. This will not end as long as the thugs are enabled.

UPDATE, 8:06 PM: Mayor Bill de Blasio is on his way to the hospital to visit the wounded officer.

A plainclothes NYPD cop was shot in the head in Queens Saturday — and a massive manhunt was underway for the gunman, sources told the Daily News.

The unidentified cop was wounded at 212th St. and 104th Ave. in Queens Village after getting into a confrontation with the assailant, sources said.

The officer was rushed to Jamaica Hospital in a patrol car. His condition was unknown.

Officers sealed off exits to the Belt Parkway in the hope of containing the shooter, sources said.

“They believe he may have gotten in a car,” a source said. “Everyone’s on the alert for this guy.”