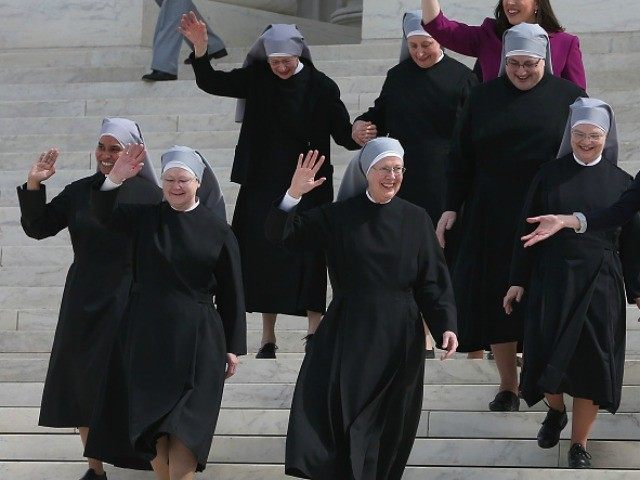 The Obama administration is claiming it has the unprecedented power to compel churches to provide abortion-related products and services.

Referring to Obamacare’s abortion-pill mandate during arguments in the Little Sisters of the Poor case at the U.S. Supreme Court, Chief Justice John Roberts asked U.S. Solicitor General Donald Verrilli, “Could you apply the same requirements you apply to the Little Sisters to the church entity itself?”

“I think we could, Your Honor, yes,” Verrilli answered.

Obamacare includes an administrative regulation that some call the “abortion-pill mandate.” It says employers who offer healthcare to their employees must cover abortion-related products and services including contraceptives and sterilization procedures.

Those who refuse are subject to a crushing penalty of $100 per employee, per day. For the nuns who make up the Little Sisters of the Poor, this would mean $70 million per year in government penalties.

In its 2014 Hobby Lobby case, the Supreme Court held that for businesses owned by people of faith who religiously object to abortion, the abortion-pill mandate violates those people’s rights under the Religious Freedom Restoration Act (RFRA). (If the Court had not decided the case on RFRA grounds, the plaintiffs also argued that the mandate violates their First Amendment religious-liberty rights.)

Knowing it faced an uphill battle, the Obama administration exempted churches. It also issued an “accommodation” for religious nonprofit groups, under which a group would certify its religious objection, and provide information regarding its insurance company. Then the government would transfer the legal obligation to pay for abortion-related matters from the religious group to the insurer.

But evangelical and Catholic ministries, colleges, universities, and other groups like the Little Sisters of the Poor, as well as Orthodox Jewish, Muslim, Native American, and Mormon groups, still objected, because filling out a form that imposes on someone else an obligation to pay for abortions would still make those faith-based organizations complicit in wrongful acts that violate their religious faith.

In seven consolidated cases—officially known together as Zubik v. Burwell, but likely to be called Little Sisters of the Poor in the history books—the justices are deciding whether this “accommodation” still violates RFRA. A federal law or regulation violates RFRA when the government substantially burdens a person’s religion, and that burden is not the least restrictive means to achieve a compelling public interest.

Former Solicitor General Paul Clement, one of the two lawyers arguing for the Little Sisters and other plaintiffs, said the nuns’ choice was that they “can adhere to their religious beliefs and pay millions of dollars in penalties, or they can take steps that they believe to be religiously and morally objectionable.”

The other lawyer was another renowned Supreme Court litigator, Noel Francisco, who attacked the Obama team’s case for its “utter lack of evidence” supporting the government’s argument as to why the abortion-pill rule is necessary.

Roberts had some tough words for Verilli. Describing how the government’s scheme works by taking control of private healthcare plans, the chief justice said, “The petitioner has used the phrase ‘hijacking,’ and it seems to me that that’s an accurate description of what the government wants to do.”

Most of the fastballs during argument came from Justice Samuel Alito, who in his trademark style included a few humorous barbs in his incisive questions.

Alito pressed Verrilli on how the administration could make this morally objectionable coverage available on Obamacare’s insurance exchanges, asking him why that would not be a less restrictive means of providing such coverage without violating anyone’s faith.

When Verrilli insisted that this could not be a more-effective substitute, Alito asked, “Is it because these Exchanges are so unworkable, even with the help of a navigator, that a woman who wants to get free contraceptive coverage simply has to sign up for that on one of the Exchanges?”

As Verrilli argued that the government has a “compelling interest” in providing “seamless” abortion-related coverage with a single plan, Alito pointed out that many “people have one insurance card for medical services and another for prescriptions, [or] for dental or vision.”

Obama’s team took a stridently liberal position on why forcing employers to pay for abortion-related matters is a public interest of “compelling” magnitude, with Verrilli later explaining that unfettered access to abortion-related services “protects the fundamental rights and liberties and dignity” of those seeking such products and services.

When Obama’s lawyer continued with this theme that America had a compelling need to avoid the “administrative burden” of Americans dealing with two separate insurance plans, Justice Anthony Kennedy picked up on Roberts’s position, saying with dry humor and a smile, “That’s why it’s necessary to hijack the plans.”

The liberal justices did not seem persuaded by Clement and Francisco. Justice Stephen Breyer said that part of being a member of society is that sometimes a religious person must “accept all kinds of things that are just terrible for him.”

At another point in the argument, Justice Sonia Sotomayor pointed out that various people of faith object to many things in society, but asked rhetorically that if the courts ruled that conscientious objectors are excused from their legal obligations, “how will we ever have a government that functions?”

The absence of the late Justice Antonin Scalia was keenly felt in the courtroom, and experienced Supreme Court lawyers on the pro-religious-liberty side lamented his absence afterward in the conversations that took place in the Court’s Great Hall, and later on the plaza at the foot of the Court’s steps.

(It should also be noted that Clement and Francisco are both former Scalia law clerks, and that Clement is rumored to be a possible replacement for Scalia if Ted Cruz is elected president.)

That’s because without Scalia, it appears the most likely outcome now is a 4-4 split decision. If so, the justices have two choices.

One is to end this case anytime in the next 90 days with a one-sentence order saying that the “judgment below is affirmed by an equally divided Court.” If so, then the case will create no national precedent, leave the lower court decisions (which were all against the Little Sisters and other plaintiffs) in place, and await one of the two other cases currently in the lower courts challenging the “accommodation” to make it to the Supreme Court, when the Court will be closer to getting a ninth justice to break the tie.

The other is for the Court to hold this case indefinitely, then when a new justice is confirmed (which looks increasingly likely not to happen until 2017), schedule the case for re-argument.

Of course, if a conservative Republican wins in November, then the entire abortion-pill mandate will likely be abolished before the Court could rule on it, either because Obamacare will be repealed, or at minimum because a new president could cancel the regulation by executive order.

In any event, if the Little Sisters and their allies prevail, it’s hard to see how that victory comes from the Supreme Court anytime soon.