One day after Arab Muslim Nazis killed in terror tunnels, Hamas claims there are no tunnels 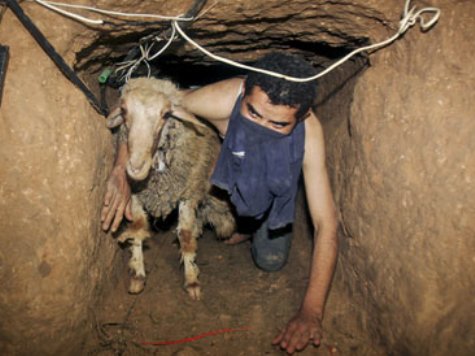 A Hamas spokesman on Saturday slammed what he described as a campaign of “incitement and deception” by a number of Egyptian journalists against the [so-called] “Palestinian” people in the Gaza Strip.

Hamas spokesman Sami Abu Zuhri denied reports that [Arab Muslims] have been traveling via tunnel into Egypt recently, denouncing what he called a “Zionist-like” network that had spread the rumors and sought to sow discord between Egypt and “Palestine”.

All of the tunnels under the border area, he said, have been destroyed and both Egyptian and [so-called] “Palestinian” security forces have been guarding both sides of the borders.

Too bad Ma’an couldn’t add a link to this story from the day before:

Two [Arab Muslims] died in separate incidents in underground tunnels beneath the besieged Gaza Strip and Egypt on Thursday.

The al-Qassam Brigades, the military wing of the Hamas movement, said that a [terrorist] in the group was killed during a “military mission” in Rafah in the southern Gaza Strip.

The brigades said in a statement that “Muhammad Talal Abu Matar, 25, from western Rafah was killed in a jihadi mission,” without providing further details.

However, a spokesperson for the Gaza Ministry of Health said that Abu Matar was killed in an accident in one of the tunnels.

Also Thursday, a young “Palestinian” man died after being accidentally electrocuted inside a smuggling tunnel connecting Rafah to Egypt.

And this one from a few days earlier:

Egyptian military officials told Ma’an that it was the longest tunnel ever discovered by Egyptian security forces.

The opening of the tunnel was found in an unpopulated area near Rafah. Large communication networks connected to satellites were found inside the tunnel.

Ma’an knows that Hamas is lying, but it doesn’t have the integrity – or the bravery – to prove it using its own reporting. Instead, when a terror group releases a statement, Ma’an acts as its mouthpiece, without caveats or context.