Public school has students ‘bowing to the sun god’ 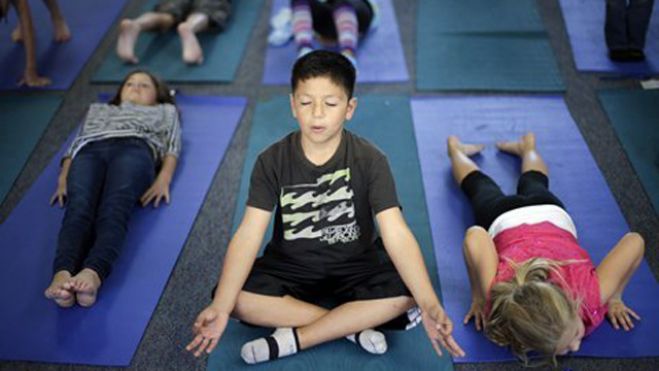 A legal case over a public school in California that has students “bowing to the sun god” is looming in an appeals court, where a team of lawyers advocating for student and parental rights is challenging the Encinitas Union School District’s Ashtanga yoga program.

It has broad implications, and it’s getting attention not just in the United States but worldwide.

Austria, for example, recently removed a similar teaching from its classes because it conflicts with students’ Catholic beliefs, and the Indian Supreme Court is examining whether the Ashtanga yoga philosophy “would discriminate against the Muslim and Christian minorities.”

“At its core, this case is about the American constitutional ideal of religious freedom,” explained Dean Broyles, who runs the the National Center for Law & Policy, which is fighting the school district’s yoga campaign.

The case is now before the California Court of Appeals in San Diego.

Broyles has been joined by Brad Dacus of the Pacific Justice Institute.

“This school district has essentially adopted a state religion and is forcing it upon our young children by requiring this class to be taken,” Dacus said. “These actions violate the fundamental right of parents to raise their children according to their beliefs, and they disregard the Constitution that this nation was founded upon.”

Also filing briefs in opposition to the yoga program were the World Faith Foundation and the Church State Council, while the California School Boards organization and the Yoga Alliance have lined up behind the school.

“No court in the past 50 years has permitted public school officials during regular classroom instruction to lead students to actively participate in devotional religious activities or practices like Ashtanga yoga’s Surya Namaskara,” Broyles said.

“Public schools may certainly teach about religion because religion is historically and culturally important. But the state is not constitutionally permitted to endorse or promote religion or religious practices,” he said.

“Courts are especially sensitive to the coercive pressures involved when the government, because education is compulsory and supported by tax dollars, leads young impressionable children with tender consciences through group liturgical/ritual religious exercises or activities including bowing to the sun god,” said Broyles.

Encinitis district officials declined to respond to WND requests for comment. A spokeswoman told WND a statement might be available later.

The case was brought by the Sedlock family, whose children were being subjected to the training of Ashtanga yoga, which was being provided to the school under a contract with a religious group that promotes the benefits of the meditation and worship.

The case is against the Encinitas Union School District, whose officials argue they have removed religious aspects of the faith activity even though a lower court found that some of the activities in the school, such as sitting and bowing, were identical to the religious “version.”

The NCLP said the question remains whether the district “is advancing or endorsing Ashtanga yoga – the religious nature of which is undisputed – or whether the district succeeded in stripping yoga (which the trial court found to be religious) of religion by creating a ‘religion-free’ form of yoga, dubbed ‘EUSD yoga.’”

At the district court level, the judge ruled that yoga is “religious” and that the school’s practices are “identical” to the faith-based practices in yoga. For example, part of what students do is to take various “praying hands” positions and bow down “to the Hindu solar god Surya,” but the lower court ruled the district could do it anyway.

“The duty and right to direct the care and upbringing of children, especially regarding religious matters, belongs to parents, not the government,” said Broyles. “Although yoga is very popular today, it is not the job of state to pick religious winners and losers, as the district has clearly done in Encinitas. We must not allow the state or cultural elites to decide by fiat which popular and politically correct religious beliefs and practices, such as Hinduism and yoga, are acceptable for the state to promote to our children with our taxpayer resources, and which beliefs and practices, such as Christianity, are not acceptable to advance.”

One friend-of-the-court brief in the case said the district “boldly posits that its yoga program ‘is no more religious than football.’”

“EUSD’s ‘football’ comparison is absurd and offensive,” the brief says. “Perhaps what EUSD really means is that for many, yoga appears to be a purely ‘physical practice.’ But it does not logically follow that because yoga appears merely physical to an uninformed observer that, therefore, yoga is as non-religious as football.”

The brief argues football “has no connection with religious practices engaged in by millions of religious adherents, as is the case with Ashtanga yoga and Hinduism.”

“Second, individuals do not engage in football for ‘spiritual development.’ Third, unless one counts sports bars and man caves, there are no Ashrams or Shalas dedicated to football in Encinitas, while Encinitas hosts world-renowned Hindu worship centers. Fourth, football players do not, in practicing football, engage in religious rituals such as closing their eyes to meditate in the lotus position or bowing down to a sun god who is worshiped by millions,” the brief says.

Broyles said a “reasonable observer who is informed about history and context of the government practice at issue, here yoga, would clearly understand that EUSD is endorsing or promoting religion.”

“In fact, since the advent of EUSD’s yoga program, students have actually made and continue to make religious associations with the practice of yoga. This includes chanting ‘om’ in yoga class and assuming the lotus position while closing their eyes and meditating during EUSD field trips off campus,” he said.

It was the Jois Foundation that “partnered” with EUSD to teach Ashtanga yoga in place of “traditional physical education.”

The group has had the support of influences as prominent as Oprah Winfrey’s boyfriend, Stedman Graham, who has lobbied on behalf of the program, which Jois wants to expand nationwide. The private organization’s interest remains significant, as it paid the school to be allowed to teach its yoga, and the teachers must be approved by the foundation.

WND previously reported the Jois Foundation, also known as Somina, included among its founders Sonia Tudor Jones, an ardent devotee of yoga who wanted to “spread the gospel of Ashtanga through the country and even internationally.” Jones worked on a plan for a three-year “scientific study” in the schools using the religious program.

The appeal of the decision by San Diego Superior Court Judge John Meyer contends that the district, “by partnering with Sonima to actively promote Ashtanga yoga, has violated the First Amendment by advancing and endorsing religious practices and excessively entangling itself with religion.”

Broyles noted, “The fact that the superintendent whose district has received $2 million from Jois/Sonima to develop their yoga curriculum by offering up EUSD’s more than 5,000 children as spiritual test-subjects, also serves on Sonima’s board advisory board should raise big red flags.

“Is this not a conflict of interest?”

He also noted that Sonima already has launched an effort to take its promotion of Ashtanga yoga nationwide.